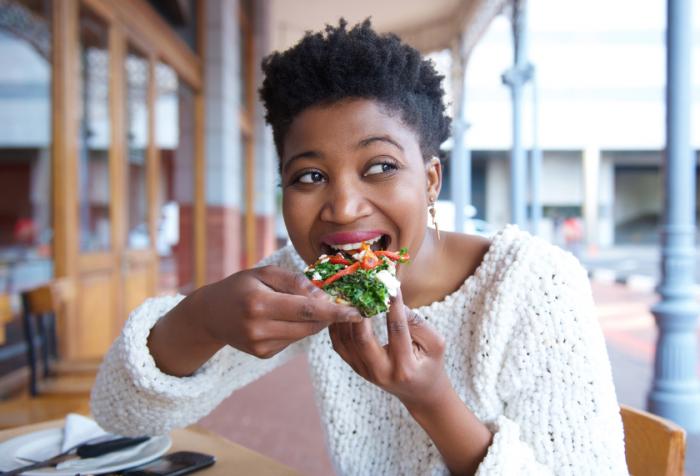 Is your New Year’s resolution to eat more healthily? If so, watch out: foods portrayed as healthy may lead to overeating and contribute to weight gain, according to new research.

Interestingly, even individuals who did not believe in the theory that unhealthy foods are less filling – as determined by the Implicit Association Test – reported greater hunger after consuming the “healthy” cookie and ordered and consumed more food when it was portrayed as healthy.

In the Journal of the Association for Consumer Research, investigators found that if we perceive a certain food to be healthy, we are likely to consume more of it.

According to study coauthor Jacob Suher and colleagues, from the University of Texas-Austin, their findings support the “healthy equals less filling” theory – the idea that we consume healthy foods in larger amounts because we consider them less filling than unhealthy foods.

The researchers conducted three experiments on three groups of participants to reach their findings.

Firstly, the team enrolled 50 undergraduate students to complete the Implicit Association Test, which was used to assess whether they believed healthy foods to be less filling than unhealthy foods.

Next, the researchers asked 40 graduate students to consume a cookie; one cookie was presented to them in packaging with nutritional information that represented it as unhealthy, while the other cookie was portrayed as healthy.

After consuming the cookie, participants were asked to report their hunger levels.

A new study has revealed that promoting healthy eating habits from infancy can help prevent childhood obesity and the onset of chronic disease.

Rebecca Byrne from QUT, said that the toddler years are a critical age in the development of long-term food preferences, but this was also the age that autonomy, independence and food fussiness begins and childhood obesity in Australia has doubled since 1986, with about 21percent of children aged 2-3 years now classified as overweight or obese.

She further added that liking a nutrient-dense diet that incorporates all five food groups was important, as evidence suggested that food preferences develop at this early age and persist into adulthood and iron deficiency also remained an issue for toddlers in both developed and developing countries.

It was also revealed that most toddlers were consuming a diverse diet, the amount and type of meat or meat alternatives was poor. Almost all children were consuming foods we would consider completely unnecessary at this age, such as sweet biscuits.

The study is published in the issue of Australian and New Zealand Journal of Public Health.

Many people will agree that finding food that is nutritious, great-tasting and affordable can be difficult. In fact, most of us think that it can be possible to obtain at least the first two of those goals, yet difficult to combine all three. Nevertheless, you should not think this goal hopeless; it is possible to find healthy, delicious recipes suitable to your budget. All you have to do is to be mindful when choosing what you eat. If your budget will allow, choosing organic meat and dairy will help to improve the nutritional profile of your meals. Below are some healthy foods that won’t break the bank.

1. White chili – This is a healthy and delicious meal that will suit any tight budget. Made with white beans and spices, a small amount of lean ground meat goes a long way. Make a delicious creamy base with yogurt and chicken broth.

2. Omelet – To get the most nutrition from this eggs choose those from free-range chickens. Made with loads of fresh, in-season vegetables, this can be a great way to get a delicious meal for not a lot of money.

3. Pork tenderloin – Cooking tenderloin is very cost-effective, yet can be very healthy. You should not be intimidated about the price of tenderloin because it will surely fits in your budget and at the same time ensures to be a healthy food.

4. Yogurt – Packed with healthy probiotics to support gut health, yogurt is also high in protein. Choose plain, whole mik organic yogurt to avoid added hormones, antibiotics, and other chemicals. A quick and delicious way to serve it is as a parfait with fresh fruit, nuts or granola.

5. Broccoli – Rich in phytonutrients and fiber this is a versatile vegetable to include in your diet. It can be eaten raw, cooked, steamed, in soups, casseroles, side dishes and more. While it does have a distinctive flavor, you can also use broccoli when juicing.

Eating healthy foods need not be expensive because you can find foods that are affordable and healthy. On the other hand, while looking for affordable foods you should make sure not to compromise on the quality of your foods. Indeed, eating healthy foods on budget means selecting the foods that are full of nutrients but are affordable. Low budget meals include grains, beans, vegetables and fruits. They are not only easy to prepare and affordable but also highly nutritious. Smart planning, creativity, and resourcefulness in shopping for foods and preparing foods can help you create delicious, healthy meals.
Source: grains and more A new study suggests that healthy dietary choices in midlife may prevent dementia in later years.

The results showed that those who ate the healthiest diet at the average age of 50 had an almost 90 percent lower risk of dementia in a 14-year follow-up study than those whose diet was the least healthy.

The study was the first in the world to investigate the relationship between a healthy diet as early as in midlife and the risk of developing dementia later on.

Previous studies on diet and dementia have mainly focused on the impact of single dietary components.

“But nobody’s diet is based on one single food, and there may be interactions between nutrients, so it makes more sense to look at the entire dietary pattern,” Marjo Eskelinen, MSc, who presented the results in her doctoral thesis in the field of neurology, said.

The doctoral thesis, published at the University of Eastern Finland, was based on the population-based Finnish Cardiovascular Risk Factors, Ageing and Incidence of Dementia (CAIDE) study.

Older adults who follow dietary guidelines tend to have a better quality of life and less trouble getting around and taking care of themselves, according to a new study.

Not many prior studies had tried to tackle that issue, researchers said.

“Our paper showed that maintaining an overall optimal diet quality will be beneficial for preserving the general well-being of older adults,” lead author Bamini Gopinath told Reuters Health in an email.

Gopinath is a senior research fellow with the Westmead Millennium Institute for Medical Research at the University of Sydney in New South Wales, Australia.

“Adhering to national dietary guidelines which is typified by high intake of fruits, vegetables, whole grains, and fish could be beneficial in maintaining a good quality of life and functional ability such as shopping, household duties, meal preparation, and taking their own medication,” she said.

Her study included 1,305 men and women age 55 and over that were part of a large Australian study of common eye diseases and general health.

Participants filled out questionnaires about what they ate and how often in 1992 to 1994.
Researchers scored each person’s diet on a scale from 0 to 20 based the Australian Guide to Healthy Eating. Higher scores indicated better diets.

The one-quarter of participants with the highest-quality diets had scores above 11.1. The one-quarter with the poorest diets scored 8.1 and below, the researchers reported in the Journal of the Academy of Nutrition and Dietetics.

Five and ten years after reporting on their diets, participants completed surveys assessing their quality of life with regard to physical health, mental health, social functioning and vitality. Each area was measured on a scale of 0 to 100.

On average, participants with the highest diet scores also reported a better quality of life.

However, there were no differences on measures of mental health or social functioning, based on diet.

The researchers also assessed how well people could perform basic and instrumental activities of daily living 10 and 15 years after the diet surveys.

There was no difference in how well people performed basic activities of daily living based on their diets. But participants with the highest diet scores were half as likely to be impaired when it came to instrumental activities compared to those with the worst diets.

The findings don’t prove diet, itself, was responsible for the differences in quality of life and how well people performed daily tasks.

But Gopinath believes they could contribute to the evidence needed to come up with strategies that help an aging population make dietary changes.

“If older adults didn’t make healthy choices when they were younger, they may need to change their habits to get the necessary nutrients for a better quality of life. In fact, many older adults are coming up short, when it comes to essential vitamins, minerals, and fiber,” Ruth Frechman told Reuters Health in an email.

She is a registered dietitian and spokesperson for the Academy of Nutrition and Dietetics and was not involved in the study.

Frechman said people can turn to the US Department of Agriculture’s MyPlate guide for help with healthy eating.

“To reduce the risk of heart disease and cancer, half of the grains should be whole grains, such as whole grain pasta, brown rice or oatmeal. It’s also important to include low-fat or fat-free sources of dairy for healthy bones,” she added.