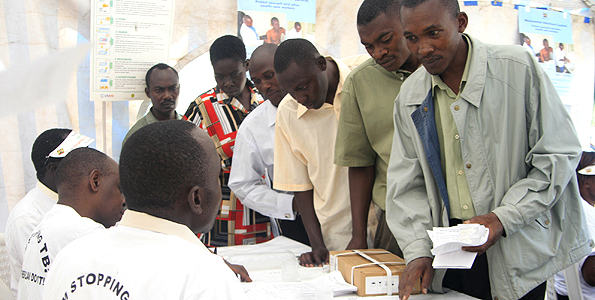 The government has explained its strategies for the envisaged expansion of medical treatment services for tuberculosis (TB) following a reported increase in the number of cases.

Tabling his ministry’s budget estimates for the financial year 2014/2015, the Minister for Health and Social Welfare, Dr Seif Rashid, told the National Assembly that data have it that the number of TB patients is on the increase and people above 45 years of age are highly affected. “For the first time the TB Prevalence Survey was conducted last year.

It showed that the disease remains a threat with 295 people affected out of 100,000. People above 45 years of age are highly affected as compared to youths,” he said.

Dr Rashid noted further that the government will continue with efforts to take TB treatment services to lesser hospitals from the Kibong’oto Hospital which is a specialized medical centre for TB treatment.

He added that TB services will be put up in mining areas as the study indicates that miners are in a risky environment when they contact the disease which is airborne.

Dr Rashid noted that Gene-Xpert machines will be distributed around the country to increase hospitals’ capacity of diagnosing TB patients. In another development, the minister said that the ministry’s efforts in collaboration with its stakeholders have managed to reduce HIV/ AIDS prevalence rate to 5.3 per cent in 2012 from 5.8 in 2008.

“This achievement has been registered following various efforts and campaigns geared at counselling and voluntary tests,” he said.

“The increase in number is a vivid demonstration that the society is highly motivated and informed on the need to understand their health status,” he said.

Dr Rashid noted that 457,901 HIV/AIDS patients were tested for TB out of which 5,413 patients or 1.2 per cent were discovered to have contracted TB and were put into treatment. But now we have to contend with a new one that is demanding our attention as well – eating poison. No, our people are not swallowing pesticides to end their lives.

They are happily eating their maize, cassava, groundnuts, rice and other foodstuffs the way they have always done.

And there lies the problem, because these foods are killing them slowly. A workshop held in Bujumbura on 6-7 March was told that millions of East Africans are at risk of aflatoxin poisoning. Simply put, aflatoxin is a poison produced by a fungus that infects various plants, cereals and legumes.

This can be either in the farm or during storage. The toxin is responsible for serious public health challenges including liver cirrhosis and stunting in children. Livestock that feeds on contaminated produce also gets affected, leading to lower productivity.

Many countries around the world have established what they deem to be safe standards to protect their citizens from harmful imports, the most stringent of these being those imposed by the European Union.

This has obviously affected the acceptability of produce from East Africa, which is said to be one of the major hotspots of aflatoxin. But the crisis has not attracted headlines.

It is unfortunate that the vast majority of our people have never even heard of aflatoxin. Perhaps, this saves them from a situation they would seem helpless to do anything about since at the end of the day they will need to eat something, anyway.

And you cannot tell them the food in the family granary is slowly but surely killing them without offering an alternative. What about the urban poor?

Putting together one meal at the end of the day is hard enough for them, so telling them to watch what they are eating may seem equally cruel. Experts say that up to 100 per cent of the harvest in some areas is often contaminated.

There are occasional outbreaks and some deaths, but generally the effects tend to be felt in the long term, which perhaps encourages officialdom to feign ignorance.

Moreover, the symptoms of aflatoxin poisoning are similar to many other conditions, which again makes it expedient to do nothing and to assume that some other condition may be the culprit. But burying our heads in the sand won’t solve the problem.