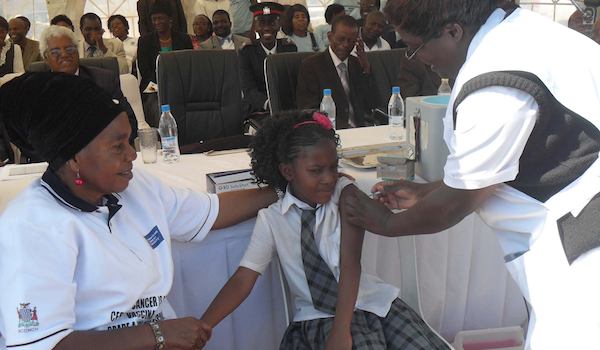 Zambia is currently ranked number one in the world as the country with the most cases of cervical cancer. Believe it or not Zambia is also number one in terms of deaths from this disease.

This condition is basically the uncontrolled growth of cells on the cervix and is caused by infection with the Human Papillomavirus, HPV. Medical and scientific studies point to the fact that the HPV is one of the most common sexually transmitted infections, STIs. These studies have also proven that HPV infection can be prevented by behaviour change and vaccination which is primary prevention and screening which is secondary prevention.

So the vaccination of young girls against the HPV is a programme that must be supported if Zambia is to eventually improve its global rating in as far as cervical cancer prevalence and mortality are concerned.

Hailed as a success, when it was first rolled out in Zambia in May 2013, the programme targets to vaccinate 50,000 grade four girls and out of school girls aged 10 years against the HPV by December 2014 in the three selected districts of Lusaka, Chongwe and Kafue.

The vaccination programme by the Zambian government with assistance of co-operating partners is being rolled out the Ministry of Education and the Ministry of Community Development, Mother and Child Health. Investigations on the ground have proved that this is an elaborate programme.

The fact that even though the initial target provided by the Ministry of Education was 25,000 girls almost 30, 000 eligible girls were found when the immunisation rolled out in 2013. This obviously created inaccurate targets.

It also turned out that in the capital, Lusaka, alone many private schools were not registered with the Ministry of Education because over 823 schools have been documented by the Ministry of Community Development, Mother and Child Health compared to initial number of 505 given by education authorities.

Challenges in rolling out the HPV vaccination programme have been identified as data management, planning and co-ordination, social mobilisation, logistics and service delivery.

Part 2 will delve into these challenges as well as lessons learned from them. But all in all, stakeholders seem to agree that the HPV vaccination programme in Zambia needs continuous and vigorous sensitisation.