A new study has recently revealed that kids living in megacities are more prone to brain damage from air pollution.

Researchers from University of Montana revealed that children living in megacities are at increased risk for brain inflammation and neurodegenerative changes, including Alzheimer’s or Parkinson’s disease.

The study found when air particulate matter and their components such as metals are inhaled or swallowed, they pass through damaged barriers, including respiratory, gastrointestinal and the blood-brain barriers and can result in long-lasting harmful effects.

Researchers compared 58 serum and cerebrospinal fluid samples from a control group living in a low-pollution city and matched them by age, gender, socioeconomic status, education and education levels achieved by their parents to 81 children living in Mexico City.

The results found that the children living in Mexico City had significantly higher serum and cerebrospinal fluid levels of autoantibodies against key tight-junction and neural proteins, as well as combustion-related metals.

The breakdown of the blood-brain barrier and the presence of autoantibodies to important brain proteins would contribute to the neuroinflammation observed in urban children and raises the question of what role air pollution plays in a 400 percent increase of MS cases in Mexico City, making it one of the main diagnoses for neurology referrals.

Once there’s a breakdown in the blood-brain barrier, not only would particulate matter enter the body but it also opens the door to harmful neurotoxins, bacteria and viruses.

While the study focused on children living in Mexico City, others living in cities where there are alarming levels of air pollution such as Los Angeles, Philadelphia-Wilmington, New York City, Salt Lake City, hicago, Tokyo, Mumbai, New Delhi or Shanghai, among others, also face major health risks. In the U.S. alone, 200 million people live in areas where pollutants such as ozone and fine particulate matter exceed the standards

People who are unable to recognise faces owing to face blindness following brain damage can still learn to distinguish between other types of very similar objects, researchers said.

Prosopagnosia, or face blindness following brain damage renders people unable to recognise and distinguish between faces – in some cases, even those of their own family members.

The finding provides fresh support for the idea that the brain mechanisms that process face images are specialised for that task.

“It also offers evidence against an ‘expertise’ hypothesis, in which the same mechanisms are responsible for recognition of faces and other highly similar objects we have learned to tell apart,” said Constantin Rezlescu, a psychologist at Harvard University in Cambridge, Massachusetts.

The team trained two volunteers to recognize greebles – computer-generated objects that differ from one another in similar ways to faces.

The two volunteers spent eight training sessions of up to one hour learning to recognise 20 different greebles.

By the end of the training, they could tell individual greebles apart just as quickly – a sign that they had become experts in recognising them.

The training also enabled the volunteers identify individual greebles with the same ease as volunteers without face blindness who underwent the same training.

“The paper refutes a core prediction of the expertise hypothesis that a brain injury which severely damages face recognition should make it impossible for someone to become very good at telling apart individual members of any other category,” Elinor McKone, a psychologist at the Australian National University in Canberra, told the Nature.

Rezlescu now plans to search for bird watchers, dog trainers and people with other such skills in a database of about 9,000 people who say they have had prosopagnosia from birth.

The study appeared in the journal Proceedings of the National Academy of Sciences1.

Are you a truck driver or shift worker planning to catch up on some sleep this weekend? Cramming in extra hours of shut-eye may not make up for those lost pulling all-nighters, new research indicates.

The damage may already be done — brain damage, that is, said neuroscientist Sigrid Veasey from the University of Pennsylvania.

The widely held idea that you can pay back a sizeable “sleep debt” with long naps later on seems to be a myth, she said in a study published this week in the Journal of Neuroscience.

Long-term sleep deprivation saps the brain of power even after days of recovery sleep, Veasey said. And that could be a sign of lasting brain injury. Veasey and her colleagues at the University of Pennsylvania medical school wanted to find out, so, they put laboratory mice on a wonky sleep schedule that mirrors that of shift workers.

They let them snooze, then woke them up for short periods and for long ones.
Then the scientists looked at their brains — more specifically, at a bundle of nerve cells they say is associated with alertness and cognitive function, the locus coeruleus.

They found damage and lots of it.
“The mice lose 25% of these neurons,” Veasey said.
This is how the scientists think it happened.
When the mice lost a little sleep, nerve cells reacted by making more of a protein, called sirtuin type 3, to energize and protect them.

But when losing sleep became a habit, that reaction shut down. After just a few days of “shift work” sleep, the cells start dying off at an accelerated pace.
The discovery that long-term sleep loss can result in a loss of brain cells is a first, Veasey said.

“No one really thought that the brain could be irreversibly injured from sleep loss,” she said. That has now changed.

More work needs to be done on humans, she said. And her group is planning to study deceased shift workers to see if they have the same kind of nerve damage. They hope their research will result in medicines that will help people working odd hours cope with the consequences of irregular sleep. 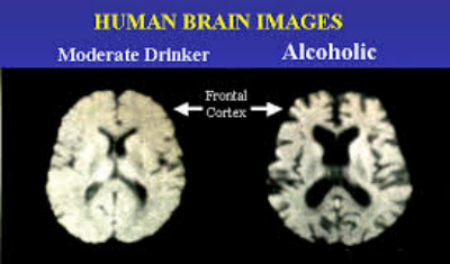 It’s hardly a secret that alcohol affects the brain — its initial effects include wobbly walking, blurred vision, and slurred speech. But although drinking in moderation isn’t necessarily harmful, and can even help with creativity, researchers in the UK are warning that the long-term effects of drinking may go further than the liver, affecting the brain in more permanent ways.

The report, “All in the Mind,” from Alcohol Concern Cymru, a charity based in London, is a supposed “wake up call” for both the public and health care providers. It highlights the dangers of alcohol-related brain damage (ARBD), an umbrella term for a range of conditions resulting from long-term drinking. These include confusion, poor concentration, memory loss, and depression, as well as other issues that may arise from drinking, like traumatic brain injuries (from falling while drunk) and ophthalmoplegia — a weakness or paralysis of the eye.

Many of these problems are also characteristics of a disease known as Wernicke-Korsakoff syndrome (WKS), a debilitating and long-lasting syndrome that actually consists of two separate conditions, according to the National Institutes of Health. One of them, known as Wernicke’s encephalopathy, is defined by mental confusion, eye paralysis, and problems with muscle coordination — oftentimes not altogether. Korsakoff’s psychosis is the other condition, characterized by persistent learning and memory problems.

“Most of us know that alcohol can damage our liver, but the fact that it could undermine our long-term brain function is much less well-known,” said Andrew Misell, director of Alcohol Concern Cymru, in a statement. “And when alcohol-related brain damage is on the radar, the focus is often on older street drinkers. But staff on the frontline have been seeing younger people, and other people who don’t fit the stereotype of a homeless dependent drinker, coming in with ARBD. … We hope this paper will be a wake-up call for all of us who drink.”

Alcohol Concern says that while moderation is key, many people instead go through periods during which they drink heavily, then abstain. The charity notes that vitamin deficiency is a major contributor to ARBD — 80 percent of alcoholics are vitamin deficient — and suggests increasing intake of vitamin B1, also called thiamine, which can be given through injections or pills