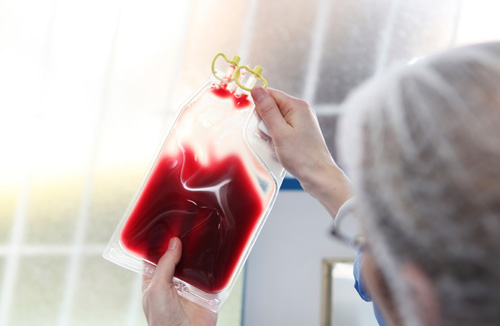 “Bone marrow transplant has emerged as an effective cure for cancerous and genetic blood diseases through transfusion of its stem cells from a healthy donor to an affected patient,” Narayana Health City consultant hematologist Sharat Damodar told reporters here Tuesday.

The corporate hospital in the city’s southern suburb claims to have performed about 300 bone marrow transplants with over 80 per cent success rate.

“As it is a challenge to find donors in India, there is need for greater awareness to donate bone marrow to needy patients,” said Damodar. A person suffers from leukemia when the bone marrow starts producing abnormal white blood cells.

“We are partnering with Cure Thalassemia, an Italian organisation, which pioneered bone marrow transplant for thalaseemia patients,” Damador said. Aplastic anemia (bone marrow failure) occurs when the quantity of each of the three blood cell types is much lower than normal.

With the largest bone marrow transplant facility, Narayana gets about 30 per cent of overseas patients for treating blood disorders. Founded by renowned cardiologist Devi Shetty, Narayana has 26 hospitals in 16 cities with 6,900 beds across the country.

Use of a twice-daily pill could turn a deadly blood cancer into a highly treatable disease, according to scientists at Weill Cornell Medical College who led a multinational research team.

Their findings on the therapy for chronic lymphocytic leukaemia (CLL), reported in the New England Journal of Medicine, suggest that patients may be able to avoid having to take debilitating chemotherapy.

CLL is the most common form of leukaemia, a cancer of the white blood cells. Some 16,000 Americans are diagnosed with CLL annually, and about 5,000 die of it each year.

“The treatment today for CLL can be worse than the disease, leading to a great deal of side effects and death. This study, and others we have conducted on idelalisib, demonstrates that we may no longer need to use chemotherapy in CLL,” says the lead investigator, Dr Richard R Furman, the Richard A Stratton Associate Professor in Haematology and Oncology at Weill Cornell Medical College and a haematologist/oncologist at New York-Presbyterian/Weill Cornell Medical Centre. “Even if this cancer remains incurable, it now can be treated as if it was a chronic disease with a pill, in the same way that high blood pressure is treated.”

CLL is a cancer of B cells, which normally produce antibodies to fight infections. In CLL, B cells grow out of control, accumulating in all of a patient’s organs. Patients are typically treated with a combination of chemotherapeutic drugs, to which they commonly respond. Unfortunately, patients ultimately relapse and require repeated cycles of chemotherapy. With each relapse, the remissions become shorter until the patient either no longer responds, or is forced to stop taking the drugs because of their side effects, which are a result of the medications’ inability to differentiate between healthy cells and cancer cells.

In this randomized, double-blinded study, researchers from 19 medical centres in five countries tested a combination of two targeted drugs – medications that attack cancer without damaging healthy cells. They compared rituximab and idelalisib against rituximab and a placebo pill in 220 CLL patients who could not receive chemotherapy.

They found that those who received the combination of idelalisib and rituximab went longer without their disease worsening than those who received only rituximab, which has been the standard of care. Six months into the study, cancers in 93 per cent of participants in the combination therapy group had not worsened, compared to 46 per cent of those in the rituximab plus placebo group.

The contrast was so significant that an independent data-monitoring committee halted the study early, in October 2013, so that all of the study participants could receive idelalisib.

“We saw incredible responses in patients who used idelalisib. Their cancer quickly melted away,” says Dr Furman, who is also director of Weill Cornell’s CLL Research Centre and an associate professor of medicine. “These types of responses were even seen in patients who didn’t respond to chemotherapy.”

Chemotherapy-resistant patients are typically the most difficult patients to treat. “It is remarkable how quickly idelalisib worked in this heavily treated group of patients, many of whom were resistant to chemotherapy. We saw responses within a week,” Dr Furman says.

Previous studies led by Weill Cornell Medical College have shown equally significant results in newly diagnosed CLL patients and in those who could tolerate chemotherapy.

“Having a treatment like idelalisib, which is highly effective and well tolerated, and thus can generate responses in patients that are unable to tolerate treatment and unlikely to respond, indicates the potential for idelalisib in all patients,” Dr Furman says.

Idelalisib is the second targeted drug that Dr Furman has tested that shows strong activity against CLL. He also studied ibrutinib in a phase 2 clinical trial reported last July in the New England Journal of Medicine. Both drugs, known as tyrosine kinase inhibitors, work on different targets within the same molecular pathway.

Ibrutinib was approved for use in mantle cell lymphoma (another B cell lymphoma) in November by the US Food and Drug Administration. Because it targets B cells, Dr Furman is using the drug as a first-line treatment for all of his CLL patients — even those who are newly diagnosed. “I am now able to avoid all use of chemotherapy in these patients, which has long been my goal,” he says.

Dr Furman believes idelalisib and ibrutinib will become the treatments of choice for all B cell lymphomas. “These drugs will change the lives of many patients,” he says. “Given the long-term toxicities of chemotherapy, leading to bone marrow failure, infections, and death, moving this therapy up front in the treatment algorithm and providing it to all patients is the next step.”

The study was funded by Gilead, for which Dr Furman has served as an advisor.