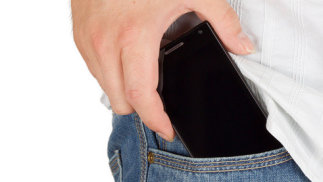 Men who keep a mobile phone in their trouser pocket could be inadvertently damaging their chances of becoming a father, according to a new study led by the University of Exeter.

Previous research has suggested that Radio-frequency electromagnetic radiation (RF-EMR) emitted by the devices can have a detrimental effect on male fertility. Most of the global adult population own mobile phones, and around 14% of couples in high and middle income countries have difficulty conceiving.

A team led by Dr Fiona Mathews, of Biosciences at the University of Exeter, conducted a systematic review of the findings from ten studies, including 1,492 samples, with the aim of clarifying the potential role of this environmental exposure.

Participants in the studies were from fertility clinics and research centres, and sperm quality was measured in three different ways: motility (the ability of sperm to move properly towards an egg), viability (the proportion of sperm that were alive) and concentration (the number of sperm per unit of semen).
In control groups, 50-85% of sperm have normal movement. The researchers found this proportion fell by an average of 8 percentage points when there was exposure to mobile phones. Similar effects were seen for sperm viability. The effects on sperm concentration were less clear.

Dr Mathews said: “Given the enormous scale of mobile phone use around the world, the potential role of this environmental exposure needs to be clarified. This study strongly suggests that being exposed to radio-frequency electromagnetic radiation from carrying mobiles in trouser pockets negatively affects sperm quality. This could be particularly important for men already on the borderline of infertility, and further research is required to determine the full clinical implications for the general population.”

“Effect of mobile telephones on sperm quality: a systematic review and meta-analysis” by Fiona Mathews et al is published today in the journal Environment International.