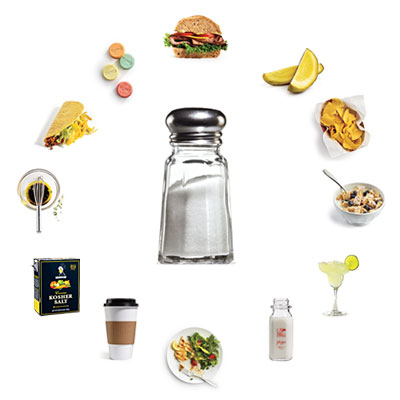 If you have high blood pressure, you’re in good company. Hypertension afflicts 67 million Americans, including nearly two-thirds of people over age 60. But it isn’t an inevitable part of the aging process. It’s better to think of it as chronic sodium intoxication. And, as an important new study from Britain shows, there’s a way to prevent the problem — and to save many, many lives.

A lifetime of consuming too much sodium (mostly in the form of sodium chloride, or table salt) raises blood pressure, and high blood pressure kills and disables people by triggering strokes and heart attacks. In the United States, according to best estimates, excess sodium is killing between 40,000 and 90,000 people and running up to $20 billion in medical costs a year.

Americans on average take in about 3,300 milligrams of sodium per day, but experts recommend less than 2,300 milligrams — and less than 1,500 milligrams for people over age 50, black people, or those who already have hypertension, diabetes or kidney disease, which adds up to a majority of American adults. Either target is far below where most Americans are now.

The reason that nearly everyone eats way too much sodium is that our food is loaded with it, and often where we don’t taste or expect it. Of course ham and canned soup are full of salt, but so are many foods that are surprising: A blueberry muffin can have more than double the salt of a serving of potato chips. Even healthy-sounding food can pack heavy sodium loads. Two slices of whole wheat bread can have nearly 400 milligrams of sodium, as can two tablespoons of fat-free salad dressing. Eight ounces of V8 vegetable juice contains well over 500 milligrams. Many restaurant entrees have far more sodium than is recommended for an entire day. Applebee’s lemon shrimp fettuccine, at 5,100 milligrams, has more than twice as much.

Doctors warn people with high blood pressure to go on a low-salt diet, but that’s virtually impossible in today’s world, because nearly 80 percent of the sodium that Americans eat comes in packaged and restaurant food (whether it’s a bagel, a sandwich or a steak dinner). You can’t take it out. And nearly everyone, not just people with hypertension puzzling over food labels, should be taking in less sodium. The only way to prevent millions of Americans from developing high blood pressure is for companies and restaurants to stop loading up their food with sodium.

Health experts have been asking the food industry to do that for decades. It’s not easy, but it isn’t impossible either. Sure, we all like the taste of salt, but there is much that food companies can do without driving away customers. Often they add sodium for leavening or food texture rather than taste, when replacement ingredients are available. And sodium levels in similar popular foods made by different manufacturers often vary two- or threefold (for example, a slice of pizza can pack anywhere from between 370 and 730 milligrams), which suggests that many manufacturers can cut sodium levels in their foods sharply without hurting taste. When salt levels in food drop, people’s preference for salt also shifts down, so no one would notice a gradual reduction in sodium across all foods.

That’s exactly what Britain’s Food Standards Agency has done. It divided processed food into different categories, set salt-reduction targets in each category and then asked companies to meet those targets over time. And as they did that, from 2001 to 2011, sodium consumption by the British fell 15 percent.

The new study shows that this drop in salt intake has been accompanied by a substantial reduction in average blood pressure, a 40 percent drop in deaths from heart attacks and a 42 percent decline in deaths from stroke.

A few scientific critics have been arguing for years that reducing salt intake is risky because it might paradoxically increase mortality in some people receiving aggressive treatment for congestive heart failure, but the British data show at a national level what smaller studies project — that when sodium levels in everyone’s food drop, so does the number of people dying from heart disease and stroke.

Lower smoking rates in Britain no doubt are helping as well, but as the authors of the study point out, the fall in mortality echoes the success of Japan and Finland in earlier decades, both of which reduced sodium consumption from sky-high levels with focused government efforts and saw huge drops in heart attacks and strokes.

Health experts I listen to say we should avoid all processed foods, eat plenty of fresh veggies, enjoy moderate amounts of fruit, try to eat…

Here in the United States, in 2010, an Institute of Medicine panel was so troubled by salt-caused deaths that it called for mandatory federal standards for sodium in food. But the question of whether the Food and Drug Administration should regulate salt is more complicated than it might seem at first. As an expert once told me, you’re never going to ban pickles.

The only way to regulate that I can see is to set maximum sodium levels within many different food categories. But that could backfire if the levels are set high and then the companies already making food with sodium below those levels take the new limits as license to increase to the maximum amount of sodium permitted. I believe that in the end we will need a combination of mandated maximums and a coordinated voluntary sodium-reduction program like that in Britain. But the voluntary plan should come first, to see how much sodium levels can be reduced that way.

There is absolutely no reason we can’t do an initiative similar to Britain’s on this side of the Atlantic now. Over the last four years, the New York City health department has led the National Salt Reduction Initiative, a network of over 90 health departments and national organizations, including the American Medical Association, the American Heart Association, the American College of Cardiology and Consumers Union, working with food companies to voluntarily cut sodium, using Britain as a model.

Twenty-one companies, including food giants like Kraft, Unilever and Subway, and many others like Mars and Goya, have joined, putting less sodium in common products like processed cheese and canned beans. But far more food companies are ignoring it, and the initiative got no commitments at all in 18 of 62 packaged food categories.

A proposal as important to human life as this needs the stature and resources of the federal government to bring the rest of the food industry along. The F.D.A. has been developing a new plan for a voluntary, coordinated, national initiative. Unfortunately, even though it is voluntary, the food industry is fighting it, and the plan is stalled.

Many people are unnecessarily on kidney dialysis, in stroke rehabilitation centers and dying because we are failing to act. Even modest reductions in sodium in food could save tens of thousands of lives and billions in health care costs every year. No one likes government mandates these days. But it’s high time the federal government starts to fix this problem by at least leading a voluntary initiative that we know will save many lives.