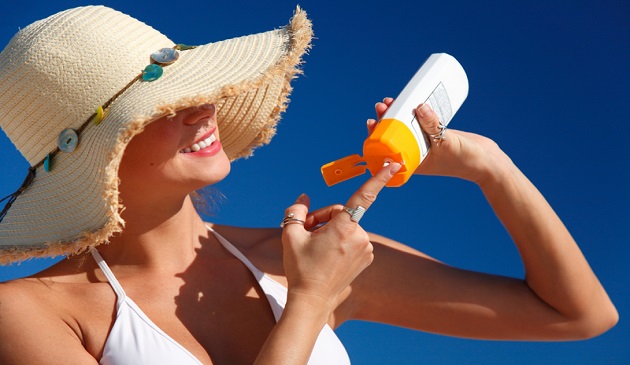 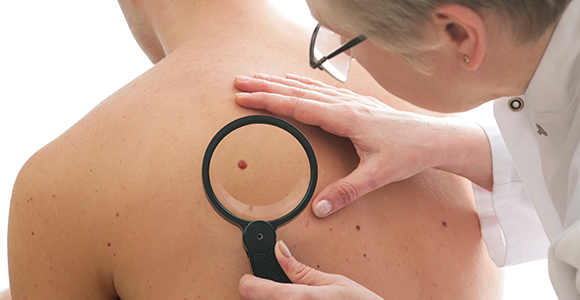 Especially between 11 am and 4 pm, when the sun’s UV rays are the strongest or when UV index is 3 or more.

Up to 80% of the sun’s rays can penetrate light clouds, mist and fog. You can still get a sunburn on a cloudy day.

Water, sand, snow and concrete can reflect up to 80% of the sun’s damaging rays.

5. Slop on the Sunscreen

Use sunscreens with an SPF of 15 or more that contain both UVA and UVB protection.

Apply sunscreen 15-30 minutes before going outside, and reapply every 2 hours (more often when working, playing, or swimming).

These lights emit mostly UVA radiation – up to 2 – 5 times as much as natural sunlight. UVA radiation causes sunburn, premature aging of the skin and skin cancer.

The UVB radiation from tanning lights is the main cause of sunburn and skin cancer and also contributes to premature skin aging.

The most harmful effects of sun exposure occur during early childhood. Keep babies under 1 year out of direct sunlight. Once infants turn 6 months of age, begin using a sunscreen for added protection. It’s important to protect your child’s eyes by using plastic lens sunglasses that protect against UVA and UVB rays.

Radiation from the sun can damage cells in the structures of your eyes. UV radiation from the sun may increase the risk of developing cataracts later in life. UV radiation can also contribute to the development of skin cancer on the eyelid or on the surface of the eye. This damage can be prevented by protecting your eyes with sunglasses that protect against 100% UVA and UVB rays. Wearing a hat with a wide brim all the way around when out in the sun. Legionnaire style caps (caps with a flap a back flap) are also recommended to help protect the neck, ears and face.

Heavy drinking can increase the risk of developing the deadliest form of skin cancer by more than half, researchers have warned.

Downing three or four drinks a day does more than make us careless about getting sunburnt, it causes biological changes which make the body more sensitive to sun, they say.

Even one drink a day can raise the chance of getting melanoma by 20 per cent; for heavier drinkers the risk is raised by 55 per cent.

She added: ‘This can lead to far greater cellular damage and subsequently cause skin cancers to form.

‘This study aimed to quantify the extent to which the melanoma risk is increased with alcohol intake and we hope that, armed with this knowledge, people can better protect themselves.’

The warnings, published in the British Journal of Dermatology, are based on a review of 16 other studies and 6,251 cases of melanoma.

The researchers admit they do not know exactly how drinking increases the cancer risk. But they found alcohol is turned into a chemical called acetaldehyde soon after it is consumed and that makes the skin more sensitive to sunlight.

Leading dermatologist Prof Chris Bunker said: ‘Brits haven’t always been known for their moderation when it comes to either alcohol or the sun but this research provides people with further information to make informed choices about their health.’