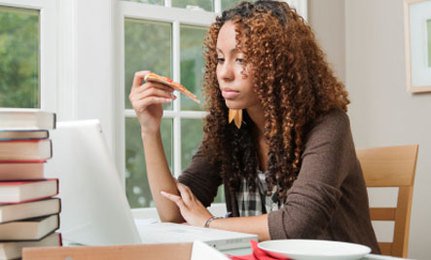 If you crave chocolate cake or Ben and Jerry’s after a stressful day, you could gain over 10 pounds in a year, warns a new study.

The research, published in Biological Psychiatry, suggests that women burn fewer calories when under stress. The study participants who reported stress also had higher insulin levels.

“This means that, over time, stressors could lead to weight gain,” said Jan Kiecolt-Glaser, professor of psychiatry and psychology at The Ohio State University and lead author of the study, in a press release. “We know from other data that we’re more likely to eat the wrong foods when we’re stressed, and our data say that when we eat the wrong foods, weight gain becomes more likely because we are burning fewer calories.”

Researchers questioned 58 middle-aged women about their stress levels, and then served them a 930-calorie meal, complete with biscuits, gravy and 60 grams of fat. The researchers then measured how long it took the women to burn those calories (their metabolic rate). The stressed-out burned 104 fewer calories than the care-free women.

The researchers also noted that women with a history of depression combined with stress had a bigger rise in triglycerides after the meal. High levels of triglycerides are associated with cardiovascular disease.

“With depression, we found there was an additional layer. In women who had stress the day before and a history of depression, triglycerides after the meal peaked the highest,” Kiecolt-Glaser said. “The double whammy of past depression as well as daily stressors was a really bad combination.”

While it’s unclear whether the effect would be the same in men, it’s probably safer for everyone to reach for a green smoothie after a long day.

You may have heard of binging on pizza as a cause of stomach distress, but how about a a cure?

Researchers found that a chemical in oregano called carvacrol causes norovirus to break down in mice, according to a study published today in the Journal of Applied Microbiology.

“Carvacrol could potentially be used as a food sanitizer and possibly as a surface sanitizer, particularly in conjunction with other antimicrobials,” Dr. Kelly Bright, who led the research at the University of Arizona said in a press release. “We have some work to do to assess its potential but carvacrol has a unique way of attacking the virus, which makes it an interesting prospect.”

Carvacrol, which gives oregano its distinctive flavor, caused the layer of proteins surrounding the vomit-inducing virus to break down. Another antimicrobial would then be able to get into the virus and kill it.

Since carvacrol doesn’t produce any noxious fumes or by-products, it has good potential to be used in sanitizers for schools or hospitals, the researchers noted.

Oregano has developed a reputation as a super-spice. In 2012, researchers from Long Island University discovered that it may also be used to treat prostate cancer. In that study, researchers found that carvacrol could be used to induce “cell suicide.”

“Some researchers have previously shown that eating pizza may cut down cancer risk,” Dr. Supriya Bavadekar, assistant professor of pharmacology at Long Island University said in a press release. “This effect has been mostly attributed to lycopene, a substance found in tomato sauce, but we now feel that even the oregano seasoning may play a role.”

The mutation for milk-drinking evolved independently in different parts of the world over the last 10,000 years as a result of strong natural selection, but why was it so advantageous?

Among the more momentous developments in human evolution was the ability to digest milk beyond early childhood.

Milk: Does It Really Do A Body Good?
Add it to the list of things that are bad for you: milk!
Mutations that enabled lifelong milk drinking appeared independently in several parts of the world over the last 7,500 years, according to growing evidence. And those genes spread rapidly. Today, about a third of adults around the world can drink milk without stomach problems, a trait known as lactase persistence.

But why was milk drinking so advantageous to humankind?

A new study debunks one leading theory: that milk provided a valuable source of vitamin D, which would’ve helped people absorb its calcium.

Newly analyzed human skeletons from an ancient site in Spain show that the milk-drinking gene spread just as rapidly in that sun-drenched climate as it did in other places, suggesting that milk must have been beneficial there for some reason other than its vitamin D content.

“Throughout the years, I have heard so many evolutionary hypotheses about lactase persistence because they are so fun to coin,” said Oddný Sverrisdóttir, an evolutionary biologist at the University of Uppsala in Sweden. “For decades now, people have hypothesized that it was because of lack of sunlight in the north of Europe that people would have had to supplement the lack of calcium and vitamin D by drinking milk.”

“Now, looking at this picture from Spain,” she said, “the calcium-assimilation hypothesis either didn’t affect the evolution of lactase persistence at all, or other forces were there as well.”

Sverrisdóttir has long been interested in how and why Europe’s early farmers began drinking milk, so she was excited when she got her hands on well-preserved samples of skeletal remains from eight people who lived in northeastern Spain about 5,000 years ago. That was well after the milk-drinking mutation had appeared in northern Europe, and she was eager to find out if those ancient Spaniards were drinking milk, too. So the first thing she did was test their DNA for lactase persistence.

“I thought at least one would have the mutation,” since so many of today’s Spanish adults can drink milk without health consequences, Sverrisdóttir said. “None did.”

To figure out whether the recent and rapid spread of lactase persistence in Spain was a fluke or if natural selection was at play, Sverrisdóttir and colleagues compared the mitochondrial DNA of modern Spaniards with the ancient samples. Mitochondrial DNA changes very slowly, making it ideal for tracing family trees over time.

And, the researchers report today in the journal Molecular Biology and Evolution, analyses showed that the ancient cave dwellers were indeed ancestors of people who live and frequently drink milk in Spain today.