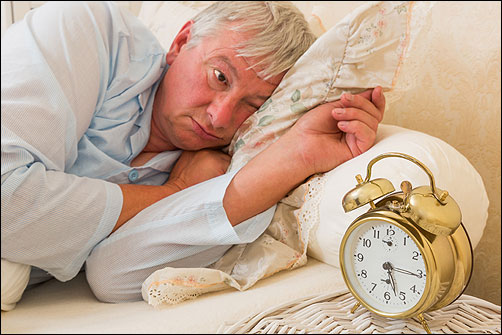 “We found that sleep quality was more strongly associated with physical activity one year later than was having a diagnosis of PTSD,” said lead author Lisa Talbot, postdoctoral fellow at the San Francisco VA Medical Center and the University of California, San Francisco. “The longitudinal aspect of this study suggests that sleep may influence physical activity.”

Study results are published in the July 15 issue of the Journal of Clinical Sleep Medicine, which is published by the American Academy of Sleep Medicine.
“This study adds to the literature that shows that better sleep leads to healthier levels of exercise, and previous research has shown that better sleep leads to healthier food choices,” said American Academy of Sleep Medicine President Dr. Timothy Morgenthaler. “It is clear that healthy sleep is an essential ingredient in the recipe for a healthy life.”

The study involved data from the Mind Your Heart Study, a prospective cohort study of 736 outpatients recruited from two Department of Veterans Affairs (VA) medical centers. PTSD was assessed with the Clinician-Administered PTSD Scale (CAPS). At baseline participants rated their sleep quality overall during the last month, and at baseline and again one year later they reported how physically active they have been during the last month. Of the 736 military veteran participants, 258 had current or subsyndromal PTSD.

According to Talbot, the results suggest that behavioral interventions to increase physical activity should include an assessment for sleep disturbance.
“The findings also tentatively raise the possibility that sleep problems could affect individuals’ willingness or ability to implement physical activity behavioral interventions,” she said. “Sleep improvements might encourage exercise participation.”

The research was performed in collaboration with principal investigator Dr. Beth Cohen of the San Francisco VA Medical Center and the Department of Medicine at the University of California, San Francisco. Research funding was provided by the National Heart, Lung, and Blood Institute (NHLBI) of the National Institutes of Health (NIH), the Irene Perstein Foundation, and the Mental Illness Research and Education Clinical Center of the U.S. Veterans Health Administration.

According to the National Center for PTSD of the U.S. Department of Veterans Affairs, PTSD symptoms such as nightmares or flashbacks usually start soon after a traumatic event, but they may not appear until months or years later. Symptoms that last longer than four weeks, cause great distress or interfere with daily life may be a sign of PTSD.