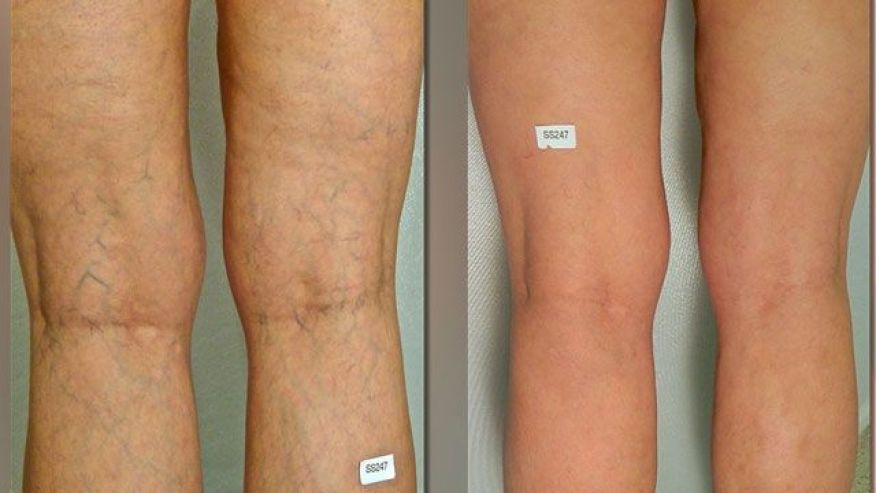 Though generally harmless, hair-thin blemishes, known as spider veins, can cause some to want to cover up even in the heat. Treating spider veins is rarely a medical necessity (though some seek treatment to relieve the aching the veins can cause), but for those who want it, spider vein-free skin is just a zap away.

No one knows why some people develop spider veins and others don’t, but genetics, the hormone estrogen and possibly the hormone progesterone are thought to play a role. Spider veins appear more frequently in women than in men, and are particularly common in pregnant women and those taking oral contraceptives or hormone-replacement therapy.

Getting rid of spider veins is safe and easy. Sclerotherapy, the gold-standard treatment for spider veins, involves injecting a saline solution or detergent into the veins, causing them to clump together or clot and become less apparent. “Anybody who has veins they don’t like is a good candidate (for sclerotherapy) because it’s an incredibly safe, easy procedure,” says Dr. Lisa Donofrio, an assistant clinical professor of dermatology at Yale University School of Medicine.

In some cases, several injections are required. The procedure feels like a tiny needle stick, and Donofrio says even needlephobic patients usually get through it with little difficulty. Donofrio particularly recommends treatment for people with a family history of problem veins who are showing signs relatively early – for example, those who have multiple patches of spider veins by their early 20s.

There is a strong chance — up to 90 percent — of greatly improved appearance after sclerotherapy, according to the American Academy of Dermatology (AAD). Results last for two years on average, notes Donofrio. After that, genetics or whatever other factors caused the veins to appear in the first place tend to take over, and maintenance treatment is required to keep the skin vein-free.

Charges for sclerotherapy typically range from $375 to $750 for both legs. Some doctors charge a set fee; others charge per vein treated.

Laser treatment can also eliminate spider veins, but it tends to be less effective and more expensive than sclerotherapy, with the same level of discomfort, according to Dr. Matthew P. Olivo, a dermatologist based in Westmont, New Jersey, and a fellow of the AAD. Lasers, however, are a good option for treating delicate areas and for people who are allergic to the injection solution.

Doctors often use a combination of sclerotherapy and lasers: sclerotherapy for the major part of the treatment and a laser to get rid of the tip of the vein. Laser techniques for removing spider veins are expected to improve greatly during the next decade.

While most side effects of sclerotherapy are not serious, you could experience a number of physical reactions during and following the treatment, including: