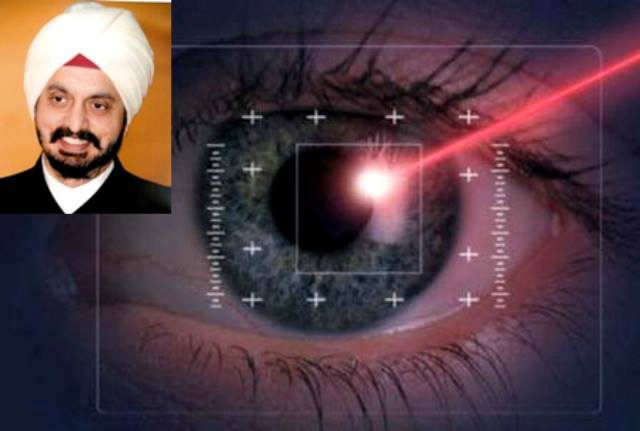 A new layer in the human cornea was discovered by the Indian doctor Harminder Dua at The University of Nottingham in 2014. It plays a vital role in the structure of the tissue that controls the flow of fluid from the eye.

The research was published in a paper in the British Journal of Ophthalmology.
The new finding could shed new light on glaucoma. The new layer named as Dua’s Layer is just 15 microns thick but incredibly tough. Comprised of thin plates of collagen, it sits at the back of the cornea between the corneal stroma and Descemet’s membrane.

It makes an important contribution to the sieve-like meshwork, the trabecular meshwork (TM), in the periphery of the cornea.

The TM is a wedge-shaped band of tissue that extends along the circumference of the angle of the anterior chamber of the eye.

It is made of beams of collagen wrapped in a basement membrane to which trabecular cells and endothelial cells attach. The beams branch out randomly to form a ‘meshwork’.
Scientists had previously believed the cornea to be comprised of five layers – from front to back— the corneal epithelium, Bowman’s layer, the corneal stroma, Descemet’s membrane and the corneal endothelium.

Pressure within the eye is maintained by the balance of aqueous fluid production by eye tissue called the ciliary body and drainage principally through the TM to the canal of Schlemm, a circular channel in the angle of the eye.

Defective drainage through the TM is an important cause of glaucoma, a condition that leads to raised pressure in the eye that can permanently affect sight. Around 1 to 2% of the world’s population yearly have chronic glaucoma and globally around 45 million people have open angle glaucoma which can permanently damage the optic nerve – 10% of whom are blind.

It is hoped the discovery will offer new clues on why the drainage system malfunctions in the eyes of some people, leading to high pressure.
Glaucoma is a devastating disease caused by defective drainage of fluid from the eye. Glaucoma is the second largest leading cause of blindness of world.