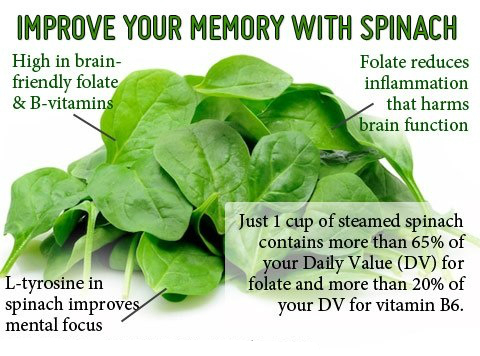 The standard American diet (SAD) depletes your body of the fiber, amino acids and B vitamins that keep your brain and memory strong and clear. Never fear — health benefits of spinach to the rescue!

This humble green is a powerhouse of folate and other B vitamins, L-tyrosine and fiber. It’s the perfect combination to improve neurotransmitter function and guard against the chronic inflammation that leads to cognitive decline and memory loss.

1. Spinach is high in brain-friendly folate. B vitamins play a starring role in the memory healing diet. Folate, in particular, helps synthesize and regulate the chemicals known as neurotransmitters, which send messages between brain cells.

An Australian study of more than 200 women found that a diet high in folate and vitamin B6, such as that found in spinach and other dark leafy greens, helped improve mental ability and short-term memory.

2. Folate reduces inflammation that harms brain function. Folate lowers the amount of homocysteine, a dangerous pro-inflammatory amino acid, in your body. According to a study published by the American Journal of Psychiatry, high levels of homocysteine disrupt the function of neurotransmitters, which can lead to cognitive decline.

The poor Western diet, based on refined carbohydrates, sugar, unhealthy fats, alcohol, nicotine, and caffeine, rapidly depletes your body’s store of B vitamins. Just 1 cup of steamed spinach contains more than 65% of your Daily Value (DV) for folate and more than 20% of your DV for vitamin B6.

4. L-tyrosine in spinach improves mental focus. L-tyrosine is an amino acid critical to synthesizing dopamine and norepinephrine, the neurotransmitters responsible for keeping your brain alert and focused. Dopamine affects your mood, while norepinephrine offers a mental lift and improves learning, problem-solving ability and memory function.

A recent study found that tyrosine helped improve memory during the increased stress of multitasking. One cup of steamed spinach provides 20% of your DV for tyrosine.

Besides being one of the health benefits of spinach, tyrosine is also found in wild salmon, yellowfin tuna, meat, poultry, whole grains, yogurt, avocados, beans, walnuts and seeds.

While the typical SAD diet leads to an increased risk for inflammatory diseases and conditions like memory loss, a high-fiber cognitive decline and loss of memory, the low-GI diet, high in fiber, prevents the wild swings in blood sugar and insulin levels that lead to chronic inflammation.

A study published in the American Journal of Clinical Nutrition found that elderly people who ate a diet high in dietary fiber scored higher in cognitive tests than those who did not. One cup of boiled spinach contains more than 17% of your DV for dietary fiber.