Ever fall asleep while Insta-scrolling on your smartphone—or purposely leave it on your bed while you snooze? You’re not alone: 44% of cell phone owners have snoozed with their phone next to their bed to make sure they didn’t miss any crucial calls or texts, according to the Pew Internet Project. But while you may have good intentions, snuggling up to your phone could be hazardous to your health. Here’s why:

You could set your pillow on fire
A Texas teen recently woke up to a burning smell. The cause? Her Samsung Galaxy S4, which was under her pillow, had partially melted and it scorched her sheets and mattress, too. More specifically, it seems like a non-Samsung replacement phone battery was to blame: the phone’s instruction manual warns against using incompatible cell phone batteries and chargers. The manual also notes that there’s a risk of a fire if the gadget is covered by bedding or other thick material. Bottom line: Stick to phone accessories from the original manufacturer, and don’t leave your cell on your bed. 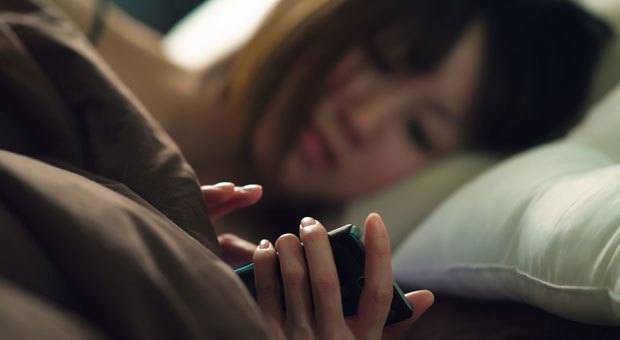 You could keep yourself awake
Cell phones (and tablets, TVs, and other gadgets with LED screens) give off what’s known as blue light—a type that studies suggest can inhibit the production of the sleep-inducing hormone melatonin and disrupt our circadian rhythms. This may be because blue light emits wavelengths similar to daylight, which can make our bodies think it’s daytime, at any time. To fall asleep when you want (and need) to, power down all electronics two hours before bedtime. Better yet, keep your phone and laptop in another room while you slumber.

The health risks of cell phones are murky
There’s been no research that proves cell phone use causes cancer; in fact, the links to any kind of health risk aren’t yet clear. In general, cell phones are said to give off such small doses of electromagnetic radiation—which is also emitted from X-rays and microwaves and can lead to tumor growth in high amounts—that they’re perfectly safe to handle. Still, the World Health Organization warned in 2011 that usage may be possibly carcinogenic to humans, especially in children, whose scalps and skulls are thinner than adults’, and more vulnerable to radiation. So if you’re at all worried about the possible cancer risk, try to text instead of call, hold the phone away from your ear, or use an earpiece or the speakerphone setting as much as possible—and definitely don’t sleep with the phone next to your head.