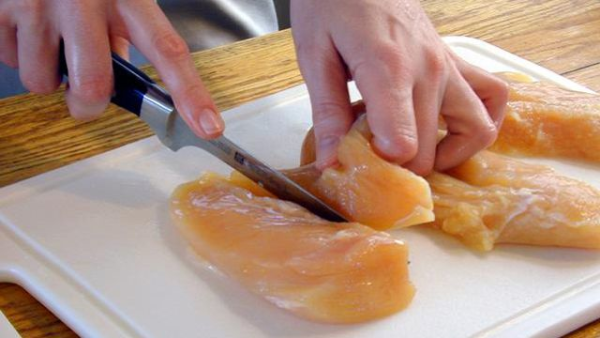 Think the meat you buy at the grocery is safe? You might want to think again. Consumer Reports researchers found potentially harmful bacteria in 97 percent of the raw chicken breasts they bought nationwide.

Urvashi Rangan, the magazine’s director of consumer safety and sustainability, told the “CBS This Morning” co-hosts the researchers went to 26 different states and shopped for 316 raw chicken breasts. The chicken was then tested for six different bacteria, all of which can be potentially harmful, she said.

“We did find 97 percent of one of the six bacteria that we looked for,” Rangan said.

Even more worrisome, she said, was that many of the bacteria samples turned out to be resistant “to three or more antibiotic classes, making them multiple-drug resistant.”

Rangan said that in terms of food-borne illness, “chicken is a big culprit.”

The report really underscores that “people should be really careful when they’re out there buying their chicken,” she said.

Shoppers want to make sure their chicken is packaged in a plastic bag, Rangan said.

She said that consumers may buy organic chicken thinking it’s safer, but that’s not necessarily so.

“Things like organic, other welfare labels do provide value, but what people don’t really realize is that the natural label actually means nothing” about possible contaminants.

Rangan explained that to protect against spreading harmful bacteria, consumers want to be very “vigilant about how you handle that chicken.”

“You want to use really careful practices in the kitchen. You don’t want to put your chicken in the sink and pour (water from) the faucet on it. You want to use a dedicated cutting board and put that right in the dishwasher” after cutting chicken on it, she said.

“All the way through from when you buy it in the store to you serve it on your plate, you want to exercise really good hygiene.”

She stressed that it’s also important to make sure poultry is cooked thoroughly. The study found that a majority of people think the cook their chicken long enough and at the proper temperature, but only 37 percent own a meat thermometer.

“You can’t know unless you have a thermometer,” she said.