That is the message of a provocative new photography series featuring the faces, and scars, of men with breast cancer.

The vast majority of the photos in that project are of young women, shown topless with scars where their breasts used to be. The pictures, which are both shocking and beautiful, are featured in a traveling exhibition that will be on display next month in Toronto.

But most visitors to the Scar Project find the photos on the Internet, where they have been viewed by millions of people. One of those people is Oliver Bogler, a cancer biologist in Houston who found out that he had breast cancer 18 months ago after noticing a lump in his chest.

As in a woman’s breast, the duct cells in a man’s breast can undergo cancerous changes fueled by hormones that influence the growth of cells. It is not clear why some men get breast cancer while most do not, but risk factors include a family history of breast cancer, inherited gene mutations, radiation exposure, extended occupational exposure to certain chemicals or intense heat, obesity, liver disease, alcoholism, and other cancer treatments.

All of these factors can influence the level of hormones in a man’s body and potentially spur breast cancer. That said, many men who develop breast cancer do not have any of these risk factors.

Fewer than 1 percent of breast cancers are diagnosed in men, but that is little comfort to the 2,400 men a year who learn they have the disease. For Dr. Bogler, 47, the diagnosis was particularly shocking because his wife had learned five years earlier that she had breast cancer.

“I struggled with the huge coincidence,” Dr. Bogler said. “We were both diagnosed when we were 46. It seemed a bit unlikely. I couldn’t imagine having this conversation with her, either: ‘Honey, I think I have what you have.’ ”

Like many cancer patients, Dr. Bogler found himself spending time online in hopes of learning more about his disease. He stumbled across the Scar Project and asked Mr. Jay if he would consider including men in the series. As a result, the Male Scar Project was created.

The photo of Dr. Bogler shows him next to a radiation machine, his chest covered with marker lines used to guide the radiation beam.

The photos of men with breast cancer are admittedly less jarring than those of women. One reason may be that it is less surprising to see a shirtless man, and the absence of his breast and nipple is not as immediately noticeable. But the portraits of the men are still haunting and show, in a more subtle way, the spiritual ravages of cancer.

The photos are also similar in that they capture both the vulnerability and the strength of breast cancer patients, regardless of their sex.

One of the subjects, William Becker, of Bridgeport, Conn., said he had wanted to be photographed to raise awareness among men who may be ignoring a lump, not realizing it could be breast cancer. 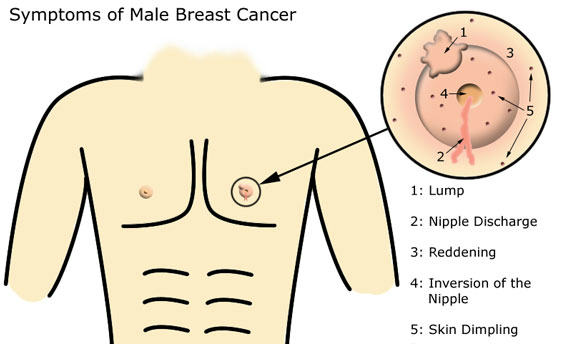 “I was dealing with a lot of health issues that could have been avoided had I done something sooner about the lump that I had found on my chest,” Mr. Becker said. “No man should be going through what I was enduring.”

Mr. Becker said he felt the photo captured his experience better than words could.

“The photo is very striking,” he said. “It gives you a sense of fear, in that there is this man with a scar on his chest and burn marks surrounding it from the radiation treatment — a kind of ‘don’t let this happen to you’ image.”

Dr. Bogler worked with Mr. Jay to include men in the Scar Project because he felt that more awareness was needed about the male experience with the disease. He also believes that more research into male breast cancer could help unlock new knowledge about the disease for both men and women.

Dr. Bogler added that while ovarian, uterine, prostate and testicular cancers are inherently gender-specific, breast cancer is no more gender-specific than lung or colon cancer.

“I was surprised to learn how little awareness there was for men,” he said. “Breast cancer is skewed toward women, but it’s not just a woman’s cancer.”

Even when filling out forms at the doctor’s office, Dr. Bogler found that many of the questions were aimed at women.

“I live in this very pink world,” he said. “I’m not complaining about it. I don’t mind skipping the ‘Are you pregnant?’ part of the form. But I realized most people don’t even know men get breast cancer.”