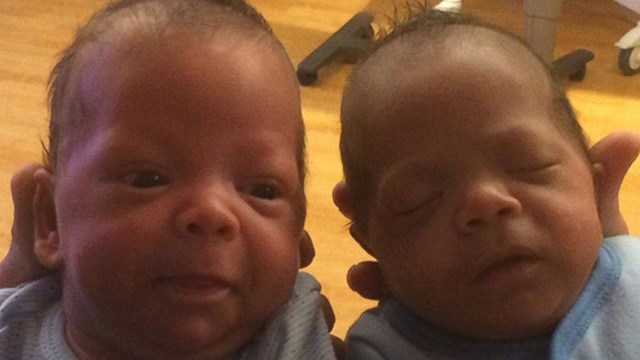 A set of twins in Boston has beaten all odds by being born 24 days apart in a rare, lifesaving delayed delivery procedure.

Lindalva Pinheiro da Silva has spoken out about the technique doctors resorted to in the hope they could save one twin when the first was born at only 24 weeks after she went into premature labor in February.

Miraculously, both twins managed to survive and, despite one being nearly a month older than the other, are recovering well. ‘One twin was born in winter, and one was born in spring,’ da Silva, 35, gushed to the Boston Globe.

Alexandre and Ronaldo were to be her first children with Ronaldo Antunes, 40, and she was thrilled to be pregnant with twins. But when her water broke in February, the excitement turned to fear.

‘I panicked,’ da Silva told. ‘It wasn’t time. It was too early. I knew I could lose the babies.’ Around 50 percent of babies born at the 24 week mark don’t survive.

When potassium sulfate injections failed to stop da Silva’s labor, doctors decided to go forward with a rare technique in which one baby is kept in the womb after its twin is born.

‘When you have a situation where one baby is born and labor stops, you are given this window of opportunity,’ Dr. Steven Ralston, director of Maternal-Fetal Medicine at Beth Israel Deaconess Medical Center, told the Globe. ‘But it’s a rare window. Most times, labor does not stop.’

Thankfully, after Alexendre was born at just 1 pound, 10 ounces, it did happen.

‘On the second day after Alexandre was born, his umbilical cord came out,’ da Silva . Her husband Ronaldo ‘saw it hanging.’

‘But they just cleaned it and put it back inside,’ she said. Da Silva was given antibiotics to combat infection, which can be common after the procedure. However, unlike many mothers, da Silva was fortunate not to require her cervix to be stitched up to keep the baby from coming.

For the next three weeks, da Silva remained in the hospital, where she was able to visit Alexendre in the neonatal unit. ‘I would sing to him and touch him,’ she recalled. Then, 24 days after his brother was born, Ronaldo came at a much more robust 3 pounds, 3 ounces.

‘That time made a crazy difference,’ da Silva said of the three-plus weeks between births. ‘He was born like a regular baby. He didn’t need a breathing tube or anything.’ The boys remain in the hospital growing stronger. Now they each weigh over six pounds each.

Doctors say they’ll likly be able to go home by their original due date of June 18. ‘They’re my miracle babies,’ gushed da Silva. ‘Ronaldo because he stayed inside, and Alexandre because he’s a survivor.
Source: daily mail