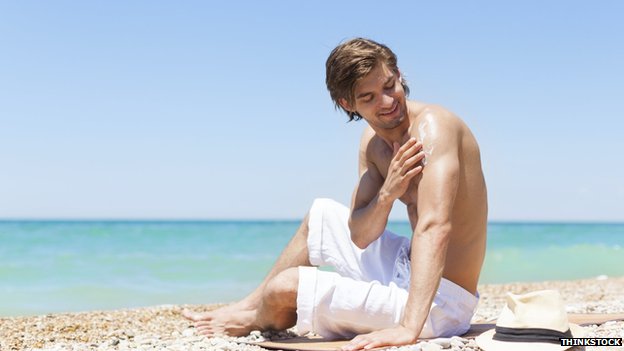 Spending time basking in the sun’s warming rays may have addictive properties, claim researchers in the US. Their study, published in the journal Cell, showed that sunlight led to the production of endorphins in the skin.

The Harvard Medical School team said their experiments on mice showed repeated UV exposure led to addiction in the animals.

Other scientists said describing it as “addiction” was a step too far. There have been previous suggestions that people can get addicted to the sun.

A study of university students using tanning salons suggested around one in three met the definition for addiction. Other trials showed withdrawal symptoms could appear, including nausea, jitteriness and shaking, when enthusiastic tanners were given a drug used to treat addiction.

Happy chemical
Researchers at Massachusetts General Hospital and Harvard Medical School were exploring how such addiction might occur.

Mice with a shaved back were exposed to the equivalent of half an hour of midday Florida sun every day for six weeks.

They showed UV radiation led to the production of a protein in the skin called proopiomelanocortin. This is broken down into the pigment melanin, which gives you a tan, but the team showed pleasure chemicals, or endorphins, were also produced.

The chemicals act on the same systems in the body as other opioids such as heroin and morphine. Giving the mice drugs to block opioids, which are used in rehab clinics, led to withdrawal symptoms including shaking and tremors.

The mice then started to avoid the place where the drugs were being administered, which the researchers said was a hallmark of addictive behaviour.

But their experiments do not show the mice actively seeking out the UV light in the same manner as a drug addict.

Dr David Fisher, one of the researchers from Massachusetts General Hospital, told the BBC: “I would say at this stage, with reasonable confidence, that this pathway really does exist and is probably present in everybody.

“People who may have no intention of using any drugs may just think they’re going out to enjoy a great day outdoors and may be becoming addicted and exposing themselves and their children to UV in a fashion which could elevate their risk of developing skin cancer.

“It sounds like a cruel joke to be addicted the most ubiquitous carcinogen in the world, it is plausible that there is an evolutionary advantage and we suspect that may relate to vitamin D.”

However, other scientists are not convinced.

‘Not supported’
Dr David Belin, who researches addiction at the University of Cambridge, said: “I’m not disregarding the interest of looking into addiction to UV light, I think this is a very interesting field and their study is going to be seminal even though their conclusions are not supported by their results.”

He said UV-addicted mice would show a preference for spending time under a UV lamp to the expense of everything else, even eating – something the researchers do not report.

If people were sun-addicted then: “You would have people giving up their family lives to get access to sunshine, you would have people who lose their jobs because they spend their day on the beach, people would maintain UV-seeking behaviour to the detriment of their everyday life.

“British people would go on holiday to the south of France and would never come back.” He added that other tan-is-beautiful social pressures may be behind addict-like behaviour in some people using sun beds.

However, he said the study itself was “outstanding” and showed that “lying on the beach recruits your opioid system and on its own it might be something you really like.”

Dr Clare Stanford, a reading in experimental psychopharmacology at University College London, said: “This study does not provide the sort of evidence needed to show addiction to UV light in mice and it is even less certain that the work predicts addiction in humans.

“This would require testing whether the mice preferred UV light or non-UV light, which was not done in this paper.”

Dr Fisher said he was motivated by the “remarkable embarrassment” of rising rates of skin cancer in the US despite widespread knowledge of the dangers of UV radiation.

He said using a suncream which blocked both UVA and UVB would probably prevent addiction. However, he did say there should be more thought about tanning salons.

His report concluded: “It may be necessary to more proactively protect individuals, including teens, from the risks of an avoidable, potentially life-threatening exposure and to view recreational tanning and opioid drug abuse as engaging in the same biological pathway.”

‘Fake it’
Sarah Williams, a senior health information officer at Cancer Research UK, said: “With most cases of skin cancer linked to too much exposure to UV from the sun and sun beds, it’s important that people know the dangers and how to protect themselves.

“While we all need some sun for strong and healthy bones, when the sun is strong it’s important to spend time in the shade and cover up with clothing.

“Sunscreen with at least SPF15 and a high star rating can help protect the parts you can’t cover and avoid using sun beds. “We’d like to see more people celebrating their natural skin tone, but if you really want a tanned look, it’s safer to fake it.”