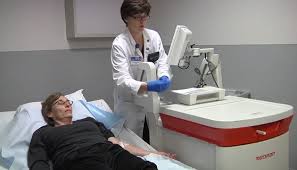 A 49-year-old U.S. woman with advanced bone marrow cancer called multiple myeloma is effectively cancer-free after receiving an experimental trial that injected her a single dose of an engineered measles vaccine, according to a new U.S. study published this week.

The patient, with tumors all over her body, including a 3-cm- diameter one on her forehead, experienced complete remission of myeloma and has been clear of the disease for over six months, according to Mayo Clinic researchers who described their trial Wednesday in the journal Mayo Clinic Proceedings.

A second patient in the study, a 65-year-old woman, did not respond as well to the virus treatment that is selectively toxic to myeloma plasma cells.

However, high-tech imaging studies “provided a clear proof” that the intravenously administered virus specifically targeted the sites of tumor growth, they said.

The researchers said the trial is a “proof of concept” that virotherapy, destroying cancer with a virus that infects and kills cancer cells but spares normal tissues, can be effective against the deadly cancer multiple myeloma.

“This is the first study to establish the feasibility of systemic oncolytic virotherapy for disseminated cancer,” Mayo Clinic hematologist Stephen Russell, first author of the paper and co-developer of the therapy, said in a statement.

“These patients were not responsive to other therapies and had experienced several recurrences of their disease,” Russell said.

Virotherapy has a history dating back to the 1950s, according to the Mayo Clinic, and thousands of cancer patients have been treated with a host of various viruses.

“However, this study provides the first well-documented case of a patient with disseminated cancer having a complete remission at all disease sites after virus administration,” according to the Mayo Clinic statement. It was noted that both patients were studied at the highest possible dose of the therapy.

Both women also had limited previous exposure to measles, and therefore fewer antibodies to the virus, and essentially had no remaining treatment options.

The researchers said their next step is to see if the measles vaccine works in a larger number of patients. They also want to test the effectiveness of the virotherapy in combination with radioactive therapy in a future study

UNICEF and its partners have begun to organize a campaign to vaccinate over 1.6 million children to stop a measles outbreak in Guinea amid growing number of cases among children especially in the capital Conakry.

Since November last year, 37 cases have been confirmed in the capital-all children under 10 years old. Over the past few weeks, the number of cases of measles has been increasing sharply and led to the death of one child.

This recent spike has prompted the Ministry of Health and Public Hygiene of Guinea to officially declare an outbreak in the Conakry municipalities of Matam, Matoto, and Ratoma. The disease has also been reported in other parts of the country -namely the prefectures of Boké, Coyah, Dubreka, Kissidougou, and Mandiana.

“We are very concerned about this outbreak. Measles is highly contagious and extremely dangerous–especially for young, malnourished children. As we’ve already seen, it can be fatal. In a densely populated city like Conakry, disease spreads quickly,” said UNICEF Representative in Guinea Dr. Mohamed Ayoya.

The Government of Guinea, UNICEF, the World Health Organization (WHO) and Médecins Sans Frontières (MSF) are joining forces to set up coordinated mechanisms to contain the outbreak. For the initial response, UNICEF will provide vaccines, refrigerators, needles, and other medical supplies and logistical support to the Government for the vaccination of children in the Kaloum and Dixinn neighbourhoods of Conakry as well as in the affected areas outside the capital. MSF and WHO will support vaccination efforts in the outbreak-declared areas of Conakry -namely Matam, Matoto, and Ratoma.

The vaccination phase of the national campaign will begin in the coming weeks as soon as vaccines, supplies and funding to ensure a continuous rollout are available.

Additionally, UNICEF and its partners will supply the Government with medicine to treat those who have already been infected by measles.

“There is no time to waste,” said Felix Ackebo, UNICEF Deputy Representative. “We need to move faster than the disease. Because measles takes up to 12 days to reveal its symptoms, it is possible that the disease has spread further into the country. All children who are still not immunized are at risk. Therefore, an outbreak immunization campaign is required as soon as possible.”

UNICEF and its partners are urgently seeking funding to replenish the stocks of vaccines needed to rollout the outbreak campaign across the country to vaccinate all children between nine months and 14 years. Additional medicines to treat those already infected are also required.