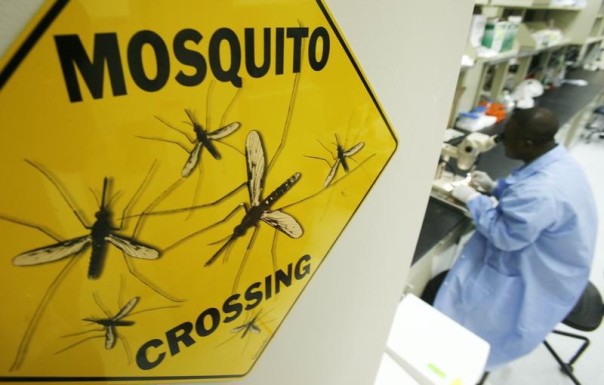 Cameroon is seeking ways to mobilise its citizens to support a government-led campaign against soaring malaria deaths, as worsening floods aggravate health risks.

Government officials in the central-west African country say regular flooding due to erratic rains is partly responsible for the recent spike in deaths from vector-borne diseases, because standing water encourages malaria-carrying mosquitoes to breed.

“The increase in the death rate from malaria in Cameroon is disturbing indeed, especially at a time when efforts to combat the disease in African were yielding positive results. The Cameroon government, however, is sparing no efforts to reverse the trend,” Alim Hayatou, secretary of state in charge of epidemics and pandemics, told the launch of a nationwide campaign against vector-borne diseases in March.

Hayatou said the 2014 campaign aims to step up official efforts to reduce the death rate from malaria by at least 75 percent before 2018, and to alleviate its heavy social and economic burden on the population.

The annual death toll from malaria in Cameroon jumped from less than 2,000 in 2011 and 2012 to over 3,200 in 2013, according to statistics from Malaria No More, an international NGO fighting the disease in Africa.

Government officials, health experts and environmentalists are unanimous on the need for a joint push to keep malaria at bay.

Against this backdrop, the government – alongside partners including UNICEF, Plan Cameroon and Malaria No More – announced a boost to the anti-malaria campaign K.O. PALU (Kick Out Malaria) with a door-to-door distribution of treated mosquito nets to families, especially with pregnant women and children, accompanied by environmental education.

According to Cameroon’s minister of public health, André Mama Fouda, Cameroon saw the distribution of free treated mosquito nets rise from 33 percent of the population in 2011 to 66 percent in 2013. But the death rate has paradoxically increased, indicating the need to accompany net handouts with messages about the environment and good hygiene practices.

“Exerting unprecedented control over the unfriendly behaviour of people towards the environment is key to succeeding in the fight against malaria and other vector-borne diseases,” the minister said.

In 2013, the government banned the production, sale and use of non-biodegradable plastic bags – which health and environment experts say have clogged up drains and gutters, contributing to floods.

“The reckless littering of…plastics on streets and waterways are some of the barriers to efforts to fight floods, because they block drainage facilities,” Tansi Laban of the ministry of environment and nature protection told Thomson Reuters Foundation in Yaounde.

“Worse still, many households and companies dispose of plastic bags by burning them, which emits toxic gases that harm the atmosphere and increase the level of dioxins and carbon dioxide in the air, resulting in ozone layer depletion. This leads to global warming and climate change,” the official added.

The government delegate to Douala City Council, Fritz Ntone Ntone, said at the malaria campaign launch that the council had completed a drainage project to channel run-off water during heavy rains into the River Wouri, in response to persistent flooding and pollution of some areas. The project, which began in January 2013 and ended this March, cost the council some 785 million FCFA ($1.57 million).

The cities of Douala in the Littoral Region and Mokolo in the Far North Region, which suffered heavy floods in 2012 and 2013, accounted for over 40 percent of malaria deaths last year, pointing to the negative effects of weather extremes for public health, experts say.

The problems of regular flooding and poor drainage need to be addressed to prevent mosquitoes breeding, said Olivia Ngou, Cameroon country director of Malaria No More.

Environmentalists have blamed Douala’s tendency to flooding on the exploitation of mangrove forests near the coast by fishermen who cut down trees to smoke fish, leaving the shore bare of vegetation and removing protection against storm surges and sea-level rise.

Statistics from the public health ministry show that children younger than five and pregnant women are the groups most vulnerable to malaria, registering over 40 percent of deaths in 2013. More than 1.6 million Cameroonians are affected by the disease each year.

The government is concerned that the population is not collaborating sufficiently with the anti-malaria drive. Last June, on World Environment Day, environment minister Pierre Hélé expressed regret that climate change was playing out in people’s lives,  yet few paid attention to ways of averting the potential risks.

Some climate change projects have either failed to take off, or have been poorly or partially implemented due to corruption and administrative bottlenecks, he said. The minister cited the planned construction of a canal to stop flooding in Douala, which was announced by the government in 2012 but has yet to begin amid allegations over mismanagement of funds.

Health workers say many people have malaria nets but do not use them because of excessive heat in the city due to overcrowding and rising temperatures linked to greenhouse gas emissions from local industry in
the country’s commercial capital.

Isaac Ebong, a doctor at Laquantini hospital in Douala, told Thomson Reuters Foundation that patients complain the nets are too warm to sleep under.

The World Health Organization (WHO) country representative in Cameroon, Charlotte Faty Ndiaye, said at the anti-malaria campaign launch her agency stood poised to help the government, as in previous years.

“WHO is always ready to work with government and civil society organisations to improve the health of the population. Thanks to efforts by WHO, some 337 million cases of malaria were prevented between 2001 and 2012,” she said.

Malaria is an entirely preventable and treatable mosquito-borne illness, according to the WHO.An estimated 3.4 billion people are at risk of malaria worldwide, according to a 2013 WHO report. Of these, 1.2 billion are at high risk, in areas where more than 1 malaria case occurs per 1,000 people.

Globally, there were an estimated 207 million cases of malaria in 2012,  and an estimated 627,000 deaths. The report said 90 percent of all malaria deaths occur in sub-Saharan Africa