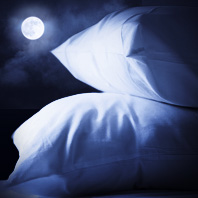 Next time when your grandmother tells you a folklore as you try to sleep on a full moon night, tell her to cut short as you are going to lose some sleep owing to the effect of lunar cycle on your brain.

Researchers have found that people actually sleep 20 minutes less when the moon is full.

“Participants slept an average of 20 minutes less and had more trouble falling asleep during the full moon phase. However, the greatest impact on REM sleep (during which most dreaming is believed to occur) appeared to be during the new moon,” said Michael Smith from Sahlgrenska Academy at University of Gothenburg in Sweden.

Based on a study of 47 healthy adults aged 18 to 30, the results support an earlier theory that a correlation between sleep and the lunar cycle exists.

“The brain is more susceptible to external disturbances when the moon is full,” Smith added.

“There may be a built-in biological clock that is affected by the moon, similar to the one that regulates the circadian rhythm,” researchers said.

Re-analysis of the data showed that sensitivity, measured as reactivity of the cerebral cortex in the brain, is greatest during the full moon.

Greater cortical reactivity was found in both women and men whereas only men had more trouble falling asleep and slept less when the moon was full, said the paper that appeared in the journal Current Biology.