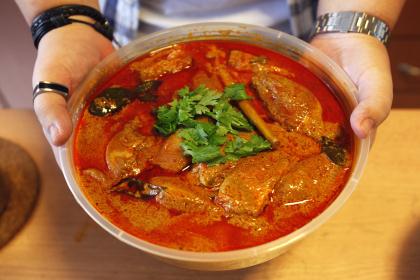 A new study suggests that super-hot curries could help you live longer.

The hot tip comes after scientists in the US ran tests on mice.

They found stopping pain signals reaching the brain increased the chance of them living longer, the Daily Star reported.

University of California’s Andrew Dillon said that blocking the pain pathway could be very useful, not only for improving lifespan but for treating diabetes and obesity .

Boffins also believed that it could halt the ageing process. Training to run a marathon has got to be one of the healthiest things you can do, right? Maybe not: A new study found that “moderate” runners lived longer than people who don’t exercise at all — and people who run lots of miles

The study involved 3,800 runners who supplied info on their heart risk factors and their use of NSAIDs like ibuprofen; almost 70% of the group clocked more than 20 miles a week. The findings were presented Sunday, but have yet to be published in a peer-reviewed journal. According to the results, how much should you run? One cardiologist who reviewed the data suggests you no more than 2.5 hours per week, spread out between two or three sessions consisting of slow or moderately-paced running.

It’s not clear why too much running might be bad for longevity, but the study appears to rule out factors like prior cardiac risk (linked to things like high blood pressure, high cholesterol, diabetes, family history, and smoking) or excessive use of NSAIDs (which have been linked to heart problems).

One doctor who’s also a running coach tells NBC San Diego that extreme exercise can actually “cause some scarring of the heart.” And another recent study found that male marathon runners had more plaque in their coronary arteries—which can lead to a heart attack—than non-runners, Pioneer Press reports. Again, it’s not clear why, but one researcher notes, “It is plausible, not proof by any stretch, that metabolic changes when running could be moderately toxic to arteries.”

Physical activity and exercise, which is the key to healthy living, prevents the building up of visceral adipose tissue (the dangerous tummy fat that causes arterial inflammation and hypertension). Research has shown that exercising for just 20 minutes a day can add around two years to your life.

Water: Remember our bodies are 80% of water. So drink plenty of water – the elixir of life. It also helps remove toxins and wastes from your body. Drink at least 2 – 3 litres of water if you want to live longer.

Make good friends: People who have good friends and have strong relationships with their families are believed to be healthier mentally as well as physically than those who cut themselves off from people and are reclusive.

Laugh out: Researchers at the University of Maryland reported that watching 15 minutes of a funny video can improve blood flow to your heart by 50%, which may reduce blood-clot formation, cholesterol deposition and inflammation. Our ancestors were not wrong when they said that laughter is a great medicine. People that tend to laugh 20 minutes a day are less prone to diseases and depressions.

A glass of wine: Research has shown that taking alcohol in moderation is good for your health. It is believed consuming one alcoholic drink per day can add +0.9 years to your life. Moderate intake of alcohol can be beneficial to reducing or even preventing some diseases and health problems.