The first patient fitted with an artificial heart made by the French company Carmat has died, the hospital that had performed the transplant in December said on Monday.

The 76-year-old man died on Sunday, 75 days after the operation, the Georges Pompidou European Hospital in Paris said in a statement, adding that the cause of his death could not be known for sure at this stage.

When he was fitted with the device, the man was suffering from terminal heart failure, when the sick heart can no longer pump enough blood to sustain the body, and was said to have only a few weeks, or even days, to live.

Carmat’s bioprosthetic device is designed to replace the real heart for as much as five years, mimicking nature’s work using biological materials and sensors. It aims to help the thousands of patients who die each year while awaiting a donor, and reducing the side-effects associated with transplants.

“Carmat wishes to pay tribute to the courage and the pioneering role of this patient and his family, as well as the medical team’s dedication,” a company spokeswoman said.

She stressed that it was premature to draw any conclusions on Carmat’s artificial heart at this stage.

Three more patients in France with terminal heart failure are due to be fitted with the device. The clinical trial will be considered a success if the patients survive with the implant for at least a month.

If it passes the test, Carmat has said it would fit the device into about 20 patients with less severe heart failure.

“The doctors directly involved in the post-surgical care wish to highlight the value of the lessons learned from this first clinical trial, with regard to the selection of the patient, his surveillance, the prevention and treatment of difficulties encountered,” the hospital said in its statement.

An in-depth analysis of the medical and technical data gathered since the patient’s operation will be needed to establish the cause of his death, the hospital added.

Carmat estimates around 100,000 patients in the United States and Europe could benefit from its artificial heart, a market worth more than 16 billion euros ($22 billion).

Among Carmat’s competitors for artificial heart implants are privately-held SynCardia Systems and Abiomed, both of the United States.

SynCardia’s artificial heart is the only one approved both in the United States and the European Union and has been implanted in more than 1,200 patients to keep them waiting for a heart from a matching donor. The longest a patient has lived with the device is just under four years prior to a transplant.

Carmat’s heart is designed to serve not as a bridge to transplant but as a permanent implant, extending life for terminally ill patients who cannot hope for a real organ, generally because they are too old and donors too scarce. 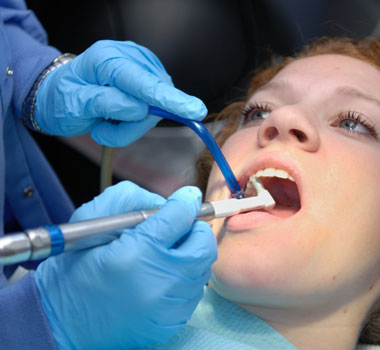 Removing an infected tooth prior to cardiac surgery may increase the risk of major adverse outcomes, including risk of death prior to surgery, according to a study in the March 2014 issue of The Annals of Thoracic Surgery.

Dental extraction of abscessed or infected teeth is often performed to decrease the risk of infection during surgery and endocarditis (an inflammation of the inner layer of the heart) following surgery.

Cardiac surgeon Joseph A. Dearani, MD, along with anesthesiologists Mark M. Smith, MD and Kendra J. Grim, MD, and colleagues from the Mayo Clinic in Rochester, Minn., evaluated the occurrence of major adverse outcomes in 205 patients who underwent at least one dental extraction prior to planned cardiac surgery from 2003 to 2013. The median time from dental extraction to cardiac surgery was 7 days (average 35 days).

“Guidelines from the American College of Cardiology and American Heart Association label dental extraction as a minor procedure, with the risk of death or non-fatal heart attack estimated to be less than 1%,” explained Dr. Smith. “Our results, however, documented a higher rate of major adverse outcomes, suggesting physicians should evaluate individualized risk of anesthesia and surgery in this patient population.”

Noting the limitations of their retrospective review, Dr. Dearani said: “With the information from our study we cannot make a definitive recommendation for or against dental extraction prior to cardiac surgery. We recommend an individualized analysis of the expected benefit of dental extraction prior to surgery weighed against the risk of morbidity and mortality as observed in our study.”

Departure from Current Thinking
In an invited commentary in the same issue of The Annals, Michael Jonathan Unsworth-White, FRCS, from Derriford Hospital in Plymouth, United Kingdom, discussed the need for surgeons to take note of the study results. “‘Accepted wisdom’ leads surgeons to request dental reviews prior to cardiac surgery in many thousands of patients annually around the world,” said Unsworth-White. “Dr. Smith’s group asks us to question this philosophy. It is a significant departure from current thinking.”

Unsworth-White noted another recent paradigm shift in the relationship between dental surgery and cardiac surgery. Prophylactic antibiotics have routinely been prescribed for patients undergoing dental work who also had existing heart problems because it had been accepted that there is a link between dental bacteremia and endocarditis. Individuals with pre-existing heart problems tend to have a higher incidence of endocarditis. “The American Heart Association and the National Institute for Health and Clinical Excellence in the UK have withdrawn support for this practice of prophylactic antibiotics because the danger from overuse of antibiotics outweighs any other potential risks. Regular tooth brushing, flossing, and even chewing gum are now recognized to dislodge as much, if not more, bacteremia than most dental procedures,” he said. 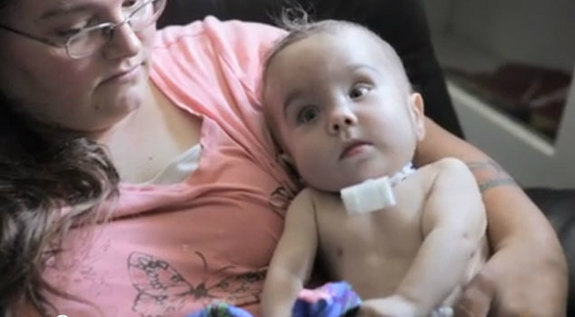 A newly developed 3D-printed heart has helped doctors perform a life-saving heart surgery on a 14-month old infant in the US.

Researchers from the University of Louisville and Kosair Children’s Hospital created a 3D printed model of the organ 1.5 times its actual size that helped the surgeons to prepare for the surgery.

Roland Lian Cung Bawi of Owensboro, Kentucky, was born with four congenital heart defects and his doctors were looking for greater insights into his condition prior to a February 10 operation.

Philip Dydynski, chief of radiology at Kosair Children’s Hospital wondered if a 3D model of the child’s heart could be constructed using a template created by images from a CT scan to allow doctors to better plan and prepare for his surgery.

The result was a model heart 1.5 times the size of the child’s. Once the model was built, Erle Austin III, cardiothoracic surgeon at Louisville, was able to develop a surgical plan and complete the heart repair with only one operation.

“I found the model to be a game changer in planning to do surgery on a complex congenital heart defect,” he said.

Roland was released from Kosair Children’s Hospital on February 14. His prognosis is good, doctors said.

An 11-year-old student of Federal Government College, Gusau has been diagnosed with a heart condition that will cost an estimated N3.47 million for corrective surgery in an Indian hospital.

Ifeoma Igbo was born with patent ductus arterosus (PDA) a congenital heart condition that’s left an open hole at the top of her heart.

She has been hospitalized with a “history of difficulty in breathing and lower respiratory tract infection during infancy and early childhood,” her medical report at Usman Danfodio University Teaching Hospital said.

Dr Usman Sani, consultant paediatric cardiologist at UDUTH, reported a heart murmur on examination but said Ifeoma had been only on “conservative management” and referred her to Madras Medical Mission in Chennai, India for surgery.

Ifeoma’s father, Donatus Igbo, a technician based in Zamfara, said the condition has hugely disrupted his daughter’s schooling.

PDA results when a major vessel at the top of heart crucial to breathing and feeding in foetuses fails to close after birth.

The condition puts a strain on the heart, causing shortness of breath and an increased risk of cardiac arrest. 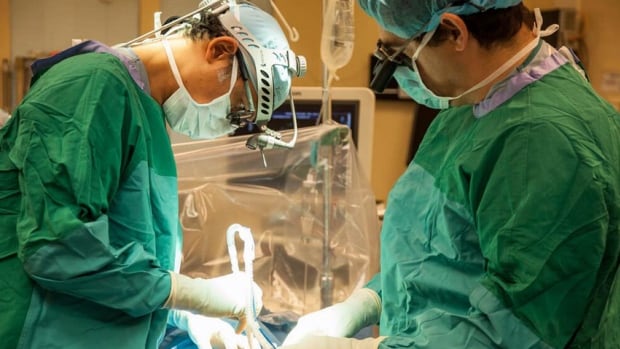 Bypass surgery is done to improve blood flow to the heart, typically after arteries have become blocked with plaque due to coronary artery disease. Surgeons remove a healthy blood vessel — often from the leg —and attach it to the blocked artery.

Sunnybrook likened it to a “road detour” around blocked arteries, with the aim of increasing blood flow to the heart.

The hospital has said the patient has given permission and referred to him by his first name, Lou.

At noon, the hospital said the grafts were complete, the heart had resumed beating successfully and Lou was off bypass. A video showed surgeons placing chest tubes to prevent blood from putting pressure on the heart during recovery. At 1 p.m., they closed his chest to complete the surgery successfully — a birthday gift for him.

Earlier, Lou was connected to a bypass, or “heart-lung,” machine to keep oxygenated blood pumping through his body during the procedure, hospital tweets said.

A surgical photo showed a radial artery harvested from his left arm, one of the patient’s two bypass grafts.

“Obviously we can’t bring the public into the operating room, so it’s nice to be able to broadcast what we do,” Dr. Gideon Cohen, Sunnybrook’s chief of cardiac surgery, said in a post-surgery interview with CBC News. “This is an engaging way of keeping the public informed.”

On Twitter, the surgical team was asked about what they feel like during the four hours at the operating table, where they listened to music on a radio.

“You don’t notice it at the time of the operation, but when you get home you feel pretty wiped,” Cohen said. “So it’s probably that kind of subconscious stress that gets to you at the end of the day.”

Scientists have developed a fingernail-sized biosensor that could alert doctors when serious brain injury occurs during heart surgery.

Johns Hopkins engineers and cardiology experts teamed up to develop the device and demonstrated in lab tests that the prototype sensor had successfully detected a protein associated with brain injuries.

“Ideally, the testing would happen while the surgery is going on, by placing just a drop of the patient’s blood on the sensor, which could activate a sound, light or numeric display if the protein is present,” said the study’s senior author, Howard E Katz, a Whiting School of Engineering expert in organic thin film transistors, which form the basis of the biosensor.

The project originated about two years ago when Katz, who chairs the Department of Materials Science and Engineering, was contacted by Allen D Everett, a Johns Hopkins Children’s Center pediatric cardiologist who studies biomarkers linked to pulmonary hypertension and brain injury.

Everett sought an engineer to design a biosensor that responds to glial fibrillary acidic protein (GFAP), which is a biomarker linked to brain injuries.

“If we can be alerted when the injury is occurring then we should be able to develop better therapies. We could improve our control of blood pressure or redesign our cardiopulmonary bypass machines,” Everett said.

“We could learn how to optimise cooling and rewarming procedures and have a benchmark for developing and testing new protective medications,” Everett added.

At present, Everett said, doctors have to wait years for some brain injury-related symptoms to appear. That slows down the process of finding out whether new procedures or treatments to reduce brain injuries are effective.

To create this sensor, Katz turned to an organic thin film transistor design.

The sensing area is a small square, 3/8ths-of-an-inch on each side. On the surface of the sensor is a layer of antibodies that attract GFAP, the target protein.

When this occurs, it changes the physics of other material layers within the sensor, altering the amount of electrical current that is passing through the device.

These electrical changes can be monitored, enabling the user to know when GFAP is present.

“This sensor proved to be extremely sensitive. It recognised GFAP even when there were many other protein molecules nearby. As far as we’ve been able to determine, this is the most sensitive protein detector based on organic thin film transistors,” Katz said.

The study was published in the journal Chemical Science.