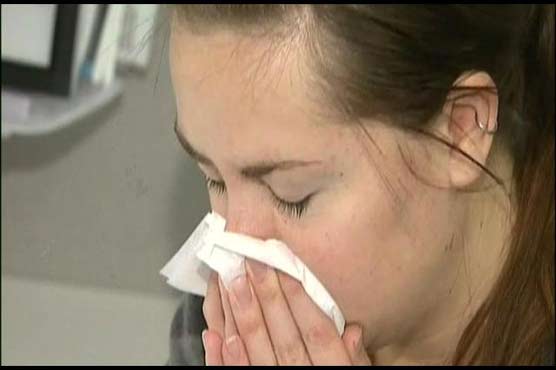 The flu is hitting young and middle aged people in the United States particularly hard this season, as a tough flu strain re-emerged and too few people were vaccinated, health authorities said Thursday.

More than 60 percent of all severe flu cases this season in the United States were in people 18-64 years old — or about double the usual rate, they said.

Typically, people at risk for flu complications include pregnant women, the elderly, children and people with compromised immune systems.

The main flu circulating this season is H1N1, otherwise known as the “swine flu” that caused a pandemic four years ago.

“It is back this year, and it is hitting younger people hard,” said Centers for Disease Control and Prevention chief Tom Frieden.

Only a third of all people in that age group were vaccinated as of November, compared to nearly two-thirds of children and elderly people, he said.

“That is one of the reasons we are seeing a much higher proportion of hospitalizations and death among 18-64 year olds than we generally see.”

People with underlying health conditions such as obesity, asthma, lung disease and diabetes are particularly vulnerable to dangerous bouts of the flu, leading to pneumonia and possibly death.

Although experts do not have a tally of US deaths yet this season, early indications suggest that there have been more deaths than normal in the 18-64 age group.

Over the previous three flu seasons, people age 18-64 represented only about 35 percent of all flu hospitalizations.

Getting vaccinated lowered the risk of having to see a doctor by about 60 percent for people of all ages, the CDC added.

“Vaccination is the single most important thing you can do to protect yourself against the flu,” Frieden said.

The flu is expected to continue to make people sick for the next several weeks across the United States.

The CDC recommends that all people over the age of six months get a flu vaccine each year.

The new flu season is ramping up across the U.S. with growing reports of illness — particularly in the south — chiefly caused by the H1N1 bug that is more likely to sicken younger adults than the elderly, health officials said Friday.

Flu activity is increasing nationwide and is already high in six states: Texas, Louisiana, Mississippi, Alabama, Oklahoma and Missouri, officials with the Centers for Disease Control and Prevention said.

For the first time since the 2009 influenza pandemic, H1N1 is the dominant circulating flu strain early in the season, CDC officials said. While most flu strains predominantly sicken the elderly and those with existing health problems, that strain mostly sickens younger adults, those ages 18 to 49, and middle-aged folks, ages 49 to 64.

CDC officials warned earlier this week that they have already received “a number” of reports of serious respiratory illness and death in young and middle-aged adults, including many infected with H1N1 flu. In Texas, where flu is widespread in all areas, a 17-year-old with underlying health problems died, health officials said.

“It’s a reminder that flu can be a serious disease,” said Dr. Joseph Bresee, a CDC flu expert.

So far, there have been no significant changes in the H1N1 flu viruses to suggest they’re spreading more easily or have become more virulent, but CDC officials said they’re monitoring for any signs.

It’s still too soon to tell how serious this year’s flu season will be, or how well this year’s vaccine matches the strains that are actually going around, Bresee said. But, he added, a flu shot is still the best way to avoid illness.

CDC recommends that everyone older than 6 months get a flu shot every year. Federal officials reported earlier this month that flu vaccinations kept nearly 80,000 people out of the hospital last year and prevented 6.6 million cases of the flu.

Still, many Americans, particularly young adults, tend not to get vaccinated.