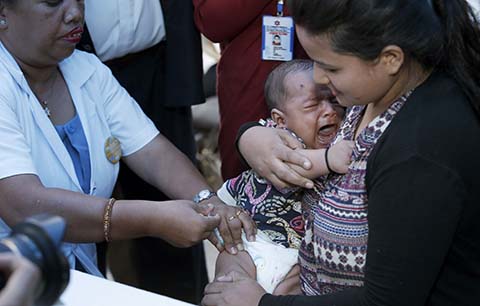 On a visit to the capital, Microsoft founder Bill Gates and his wife Melinda, who represent the Bill and Melinda Gates Foundation, were in conversation with celebrated author Chetan Bhagat on the topic “All Loves Have Equal Value”. Replying to a question what their expectations were from the Narendra Modi government, Melinda Gates said: “We are very enthused with the government that has come to power.

“I think in a couple of years, especially in the health sector, there will be optimism. For instance, the fact that they are keen to roll out four key new vaccines across India, is absolutely huge.” “We also see their (Modi’s government) commitment to newborns and also towards sanitation that will help reduce diarrhoeal infections and make sure that children get nutritional diet in schools,” she added.

Bill Gates, however, quickly added that it won’t be an easy task for the government. “Take the economy as a whole. It seems some unpopular things need to be done. Are they willing to do things that are good for the country, but that they can’t immediately embrace,” he asked.

Melinda Gates was referring to the introduction of four new vaccines, including one for Japanese Encephalitis, in the national immunisation programme, which will provide free vaccines against 13 life-threatening diseases to 27 million children annually. Vaccines for rotavirus, rubella and polio (injectable) were also introduced as part of the universal immunisation programme in July.

Bill Gates, one of the richest men in the world, became involved in philanthropic work with the creation of the foundation in 2001. It aims to help people lead healthy lives and use technology and research to find solutions to health and preventive issues. They launched their foundation in India in 2003 with an HIV/AIDS prevention programme known as the Avahan initiative.

Melinda Gates also said she feels “outraged” whenever she sees a woman being illtreated in any part of the world, including her own country. “I get very outraged to see domestic violence. But I try to find ways to empowering these women. We need to understand their culture and break down social structures that confine them. I think of ways to empower these women,” she said.