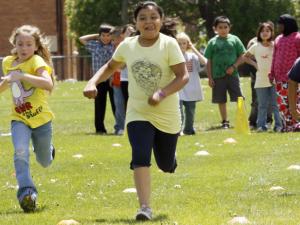 Children who are physically fit have faster and more robust neuro-electrical brain responses during reading than their less-fit peers.

Children who are physically fit have faster and more robust neuro-electrical brain responses during reading than their less-fit peers, a new study has found.
These differences correspond with better language skills in the children who are more fit, and occur whether they’re reading straightforward sentences or sentences that contain errors of grammar or syntax.

The findings do not prove that higher fitness directly influences the changes seen in the electrical activity of the brain, the researchers say, but offer a potential mechanism to explain why fitness correlates so closely with better cognitive performance on a variety of tasks.

“All we know is there is something different about higher and lower fit kids,” said University of Illinois kinesiology and community health professor Charles Hillman who led the research.

“Now whether that difference is caused by fitness or maybe some third variable that (affects) both fitness and language processing, we don’t know yet,” said Hillman.
The researchers used electroencephalography (EEG), placing an electrode cap on the scalp to capture some of the electrical impulses associated with brain activity.
The readouts from the electrodes look like seismic readings captured during an earthquake, and characteristic wave patterns are associated with different tasks.
These patterns are called “event-related potentials” (ERPs), and vary according to the person being evaluated and the nature of the stimulus, graduate student Mark Scudder said.

For example, if you hear or read a word in a sentence that makes sense, the component of the brain waveform known as the N400 is less pronounced than if you read a sentence in which the word no longer makes sense, Scudder said.
The researchers found that children who were more fit (as measured by oxygen uptake during exercise) had higher amplitude N400 and P600 waves than their less-fit peers when reading normal or nonsensical sentences.

“Our study shows that the brain function of higher fit kids is different, in the sense that they appear to be able to better allocate resources in the brain towards aspects of cognition that support reading comprehension,” Hillman said.
The study was published in the journal Brain and Cognition. A doctor who helped write guidelines discouraging media use by babies and toddlers says he’s had second thoughts about the iPad and other devices.

Dr. Dimitri A. Christakis, a Seattle pediatrician who studies the effect of media on children, now says that kids younger than 2 may actually benefit from 30 minutes to 60 minutes a day of screen time — as long as it’s interactive, not passive.

“I believe that the judicious use of interactive media is acceptable for children younger than the age of 2 years,” he wrote in an opinion piece this week in the journal JAMA Pediatrics.

It’s a somewhat surprising position for the researcher who admits he’s developed a reputation as the “anti-TV guy,” especially when it comes to the youngest viewers. He co-authored the American Academy of Pediatrics 2011 guidelines that frown on media use by kids younger than 2.

In the new piece, however, Christakis notes that the guidelines, updates of 1999 recommendations, were written before the 2010 debut of Apple’s iPad and the slew of tablets and devices that followed.

“The statement was drafted with no knowledge that such a device would ever exist,” wrote Christakis, director of the Center for Child Health, Behavior and Development at Seattle Children’s Research Institute.

“Now, 3 years later, we still know surprisingly little about how iPads and other interactive media technologies affect children’s cognition — research is simply unable to keep up with the pace of technological advances —and these devices are increasingly popular.”

Even without hard data, however, Christakis said he has concluded that interactive iPad and device apps that engage a baby may be as mentally stimulating as old-fashioned toys such as blocks or even a See ‘N’ Say, which allows kids to develop a sense of accomplishment by matching animal images and sounds.

They’re all very different than passive television viewing, which is known to have detrimental effects on cognition, or videos or DVDs aimed at babies, which can be overstimulating and potentially harmful, Christakis said.

That’s a view echoed by Elizabeth R. Sowell, a neuropsychologist at the Keck School of Medicine at the University of Southern California. She told TODAY that guidelines based on TV viewing aren’t comparable to those for interactive screen time on devices used by babies and toddlers.

“The brain is developing so rapidly during that period of time and interactive challenges, whether it’s blocks or playing games on the iPad, that’s really going to wire the brain differently than passive viewing,” said Sowell, who is also principal investigator at The Saban Research Institute of Children’s Hospital Los Angeles.

Both Christakis and Sowell cautioned that parents need to closely monitor their babies’ screen time. Just as there have been problems with too much internet use in older kids and teens, there’s the danger of “compulsive use of iPads” among the youngest users.

And, iPad or other device use should never interfere with the full range of social, physical and other activities that babies need to develop, Christakis added.

“I do hope parents will take to heart that they should put some limits on it,” he said. “This is not just to allow their child to play willy-nilly for hours and hours.” Using marijuana during pregnancy could affect a baby’s brain development by interfering with how brain cells are wired, a new study in mice and human tissue suggests.

Researchers studied marijuana’s effects on mice and brain tissue from human fetuses, and found that the active ingredient in marijuana, THC, interferes with the formation of connections between nerve cells in the cerebral cortex, the part of the brain responsible for higher thinking skills and forming memories.

“Our advice is that [pregnant] mothers should avoid marijuana,”said neuroscientist Tibor Harkany of the Karolinska Institute in Sweden, and the Medical University of Vienna, in Austria, who led a study detailed today (Jan. 27) in the EMBO Journal. [11 Facts Every Parent Should Know About Their Baby’s Brain]

Harkany added that the effects of prenatal marijuana exposure could even last into adulthood. The drug could have direct effects, or it could sensitize the brain to future drug exposure or neuropsychiatric illnesses.

Previous studies have found that exposure to marijuana during pregnancy can increase a child’s risk of having cognitive deficits or psychiatric disorders.

While it is not exactly clear how marijuana may affect the fetal brain at a molecular level, it seems the brain may be particularly sensitive to THC (delta-9-tetrahydrocannabinol) during early development, when neurons are forming critical connections. Any drug that interferes with this development could be detrimental to the child, Harkany said.

In the study, Harkany and his colleagues tested marijuana’s effects in three ways: They grew brain cells from mice in the presence of THC, they injected pregnant mice with THC, and they studied the brains of electively aborted human fetuses whose mothers had used marijuana during pregnancy.

The researchers identified a specific protein in nerve cells, called Superior Cervical Ganglion 10 (SCG10), which is essential for normal brain wiring. They found lower levels of this protein in the brains of both human and mouse fetuses exposed to THC compared with individuals who weren’t exposed to THC, suggesting that marijuana exposure has a specific effect on the developing brain.

An increasing number of women of childbearing age are using marijuana, and this group should be made aware of the potential impact on the brain development of their children, she said.

Harkany added that pregnant women should avoid using marijuana use for medical purposes.

Previous long-term studies have shown that children exposed to marijuana in the womb may have an increased risk of showing cognitive effects, seeking out drugs, or having attention deficit disorder, anxiety or depression, according to the study.

Harkany and his colleagues didn’t study the effects of marijuana use prior to pregnancy, but he said the drug is cleared from the body in a period days, not months, and using it prior to conception is more likely to affect the likelihood of becoming pregnant than the fetus itself.

So far, Harkany said, no studies have compared the effect of marijuana to that of other drugs, such as alcohol, on fetal brain development.

A new study has found that paracetamol can interfere with the brain development of children, and can even be dangerous for unborn kids.

Researchers at Uppsala University examined paracetamol, one of the most commonly used drugs for pain and fever in children, by giving small doses of it to ten-day-old mice. They later carried out tests on the behavioural habits of the mice in adulthood.

They found that the mice could be hyperactive in adulthood, could display behavioural disturbances, and could have lower memory capability compared to the mice that weren’t given the dose.

Researchers said that the exposure to and presence of paracetamol during a critical period of brain development can induce long-lasting effects on cognitive function and alter the adult response to paracetamol in mice.

They added that parents should be careful in administering the drug.

Researcher Henrik Viberg told the Upsala Nya Tidning newspaper that this shows that there are reasons to restrict the use of paracetamol at the end of pregnancy and to hold back from giving the medicine to infants.

The study was published in the online Toxicological Sciences journal.