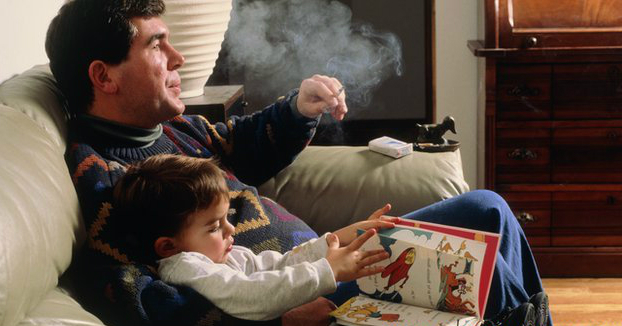 Exposure to second-hand smoke in childhood causes irreversible damage to children’s arteries – increasing their risk of heart attacks or strokes when they grow up, according to a large international study published on Wednesday.

The research, which lends weight to campaigns for smoking to be banned in private cars and homes, found passive smoking leads to a thickening of children’s artery walls, adding some 3.3 years to the age of blood vessels by adulthood.

“Exposure to passive smoke in childhood causes direct and irreversible damage to the structure of the arteries,” said Seana Gall, a researcher in cardiovascular epidemiology who led the study at the University of Tasmania.

She said parents, or even those thinking about becoming parents, should quit smoking – both to aid their own health and protect the future health of their children.

Smoking causes lung cancer, which is often fatal, and is the world’s biggest cause of premature death from chronic conditions like heart disease, stroke and high blood pressure.

On top of the 6 million people a year killed by their own smoking, the World Health Organization (WHO) says another 600,000 die a year as a result of exposure to other peoples’ smoke – so-called second-hand or passive smoking.

Of the more than 4,000 chemicals in tobacco smoke, at least 250 are known to be harmful and more than 50 are known to cause cancer, the WHO says – and creating 100 percent smoke-free environments is the only way to protect people fully.

This latest study, published in the European Heart Journal, was the first to follow children through to adulthood to look at links between exposure to parents’ smoking and thickness of the innermost two layers of the arterial wall, known as carotid intima-media thickness (IMT).

Researchers from Finland and Australia looked at data from 2,401 people in Finland 1,375 people in Australia who were asked about their parents’ smoking habits. The scientists used ultrasound to measure the thickness of the children’s artery walls once they had reached adulthood.

The results showed that carotid IMT in adulthood was 0.015 millimeters thicker in those exposed to both parents smoking than in those whose parents did not smoke.

Gall said that while this was a “modest” increase, it was nonetheless an important extra and irreversible risk for suffering heart attacks or strokes later in life.

Since children of parents who smoke are also more likely to grow up to be smokers themselves, and more likely to be overweight, their heart health risks are often already raised, she said, and the second-hand smoke adds yet more risk.

The researchers said the findings showed reducing children’s exposure to smoke is a public health priority.

“Legislation can reduce passive smoke exposure, with restriction of smoking in public places reducing hospitalizations for cardiovascular and respiratory disease,” they wrote, adding that banning smoking in cars with children in them would also have a significant positive effect.

The United States, Australia and Canada have already banned smoking in cars carrying children, and Britain said last month that it too would be introducing a ban soon.