Concussions have already been linked to the Alzheimer’s-like degenerative brain disease chronic traumatic encephalopathy (CTE) in athletes and military members who have experienced repeated head blows and traumatic brain injuries.

Now, a new study links concussions to Alzheimer’s disease itself.

Mayo Clinic researchers gave brain scans to 141 Minnesotans who had been experiencing memory problems, and found those who had suffered a brain injury that caused them to black-out had more amyloid plaques in their brain than those who hadn’t.

Amyloid plaque is the telltale sign of Alzheimer’s disease, formed by pieces of a sticky protein that break off in the brain and clump together. Some clumps may form in brain regions involved in learning, memory and thinking, the Alzheimer’s Association explains. More plaques form as the disease progresses. 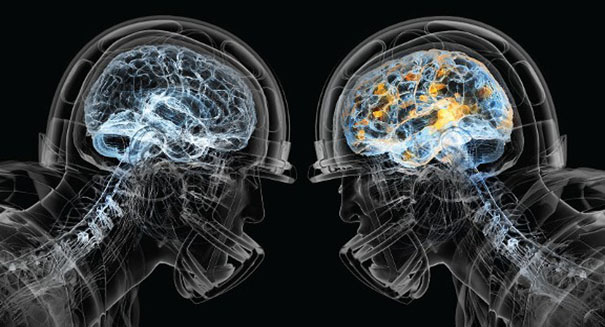 Researchers gave brain scans to 448 people without any memory or cognitive problems, and 141 people who had mild cognitive impairment (MCI), a condition characterized by declines in memory and thinking skills that aren’t caused by aging. They were also asked whether they had ever experienced a brain injury that caused them to lose consciousness. People with MCI are at a heightened risk of developing Alzheimer’s or another type of dementia, but not everyone with the condition will get worse.

The researchers found 18 percent of those with MCI had reported a prior brain injury, and on scans, they saw the patients had an average of 18 percent more amyloid plaques than those with no history of head trauma. They found no plaque differences in any of the brain scans of people without memory problems, regardless of whether they’d had a brain injury.