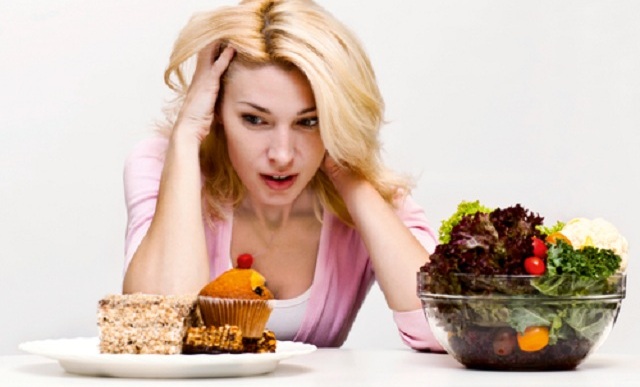 Researchers sure know how to take the “comfort” out of comfort food.

It seems that experiencing one or more stressful events the day prior to eating just one single high-fat meal — the kind we’re most likely to indulge in when frazzled — slows the body’s metabolism so much that women could potentially experience an 11-pound weight gain over the course of a year, according to a new study published in the journal Biological Psychiatry.

Participants included 58 healthy women, 38 of whom were breast cancer survivors and 20 of whom were similar in terms of demographics.The average age of participants was 53. During two visits with the research team, participants received either a meal high in saturated fat, the so-called “bad fat,” or a meal high in sunflower oil, a monounsaturated fat that is associated with various health benefits. The meal itself was a whopper: 930 calories with 60 grams of fat — about the same as a double-deck burger and medium fries. The researchers used standardized clinical tools to rank stressors and to assess major depressive disorder.

After the participants indulged, metabolic rate, or how efficient these women were at burning calories and fat, was measured. Blood sugar levels, triglycerides, insulin and the stress hormone cortisol were also assessed.

Results showed that on average study participants who reported one or more stressors, such as arguments with co-workers or spouses, disagreements with friends, trouble with children or work-related pressures, during the previous 24 hours burned 104 fewer calories than non-stressed women in the seven hours after eating the high-fat meal.

That difference, say researchers, could result in an 11 pound weight gain in one year. And they also experienced less fat oxidation in which so-called large fat molecules are converted into smaller molecules used as fuel.

“The question we were asking is whether stress affects metabolism, and I was so surprised at the magnitude of the effect,” says Dr. Jan Kiecolt-Glaser, professor of psychiatry and psychology at The Ohio State University and lead author of the study.

It’s no secret that stress makes many of us turn to these high-fat-high-sugar comfort foods. And other studies do show that people who experience stress and other mood disruptions are at higher risk of obesity. The primary reason is overindulgence on high-fat, high-calorie comfort foods.

Researchers did find that a history of depression alone did not affect metabolic rate, but depression combined with previous stressors led to a steeper immediate rise in a form of fat called triglycerides. High triglyceride levels are a risk factor for cardiovascular disease.

How stress makes us pack on the pounds is indeed a complicated and still poorly understood process. “The relationship between stress and eating is really complex both from a biological view as well as from a psychosocial view, and there is no nice clear pathway that explains everything that is happening,” says Dr. Leslie Heinberg, Director of Behavioral Services for the Bariatric and Metabolic Institute of the Cleveland Clinic. “But what this study does is give us more information on other potential pathways.”

The study is small and there are limitations. “This was a very controlled, one-time thing, and I do think the 11 pounds a year goes beyond the data,” she says, since people may compensate for their indulgences at later meals in the real world. And self-reported stressors can be squishy, despite efforts to control the differences between say the angst of having to give a speech or having a fight with a co-worker. Another complication was the fact that most study participants were breast cancer survivors, which can add even more stress.

Obesity is still at crisis levels both here in the U.S. and globally. It doesn’t help that humans “. . . are biologically set to put on weight and keep on weight and even with diets, exercise or surgery, we are fighting a big biological tide,” says Heinberg.

“What this (study) and other lab studies show is that there’s more to obesity than a lack of willpower, it’s a complex biological problem.”

If you’re looking for a bright side, TODAY Diet and Nutrition Editor Madelyn Fernstrom notes that the impact of stress is a small fraction of the picture: Most weight gain is caused by overeating, plain and simple.

“The good news is that the 100 calories a day extra can be offset by a 30 minute walk,” she says. “This can mean the difference between weight stability and weight gain.”