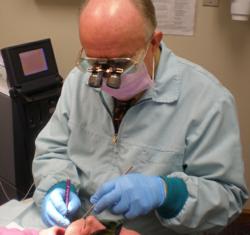 Years ago, 78-year-old Florence Lee underwent surgery for periodontitis, a severe form of gum disease. And her experience was horrible.

When Lee learned she might need to be treated again, she was fearful of the procedure, which involves cutting into the gums in order to remove the bacteria that leads to bone loss.

Luckily, Lee learned about a new treatment for gum disease, called laser-assisted new attachment procedure (LANAP). During the procedure, doctors place a tiny fiber in the pocket between the gum and the tooth, delivering the same results with less pain.

“What it does is it targets specifically the inflamed tissue, the infected tissue and the bacteria associated with causing the periodontal destruction,” said Dr. Sam Morhaim, a periodontist at the Great Neck & Mid-Island Dental Associates in New York.

Morhaim said patients typically come in for two visits, each of which last about two hours. Comparatively, traditional surgery can take four or more sessions.

If LANAP catches on, Morhaim said it could do for dentistry what LASIK surgery did for ophthalmology. Other benefits of LANAP include reduced pain, swelling and sensitivity, in addition to the fact that no cutting or sutures are involved in the procedure. Furthermore, it offers great results.

“”We’re starting to see regeneration of the lost tissues, which is very exciting for us, because now we can offer

Lee decided to undergo the LANAP procedure and said that after the surgery, she didn’t experience any pain. She was even able to drive herself home afterwards, because the procedure requires only local anesthesia. technology that is super conservative compared to our conventional means with less downtime,” Morhaim said.

“I would recommend anyone who was having (periodontitis) and (was) fearful of it would have laser (treatment) and not any other procedure,” Lee said.

While insurance plans typically cover LANAP, only a few doctors in the country are performing the procedure.