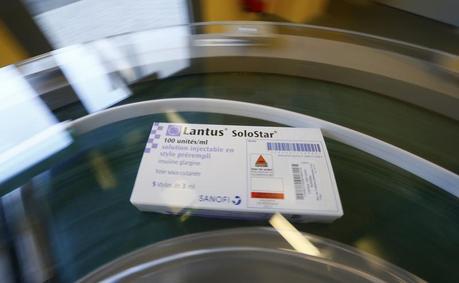 An improved version of Sanofi’s diabetes drug Lantus is better than the old one at controlling blood sugar levels and comes with fewer hypoglycemic events, new late-stage trial data showed on Tuesday.

The treatment is one of several drugs Sanofi is betting on to defend its No.2 spot on the world’s $42 billion diabetes market as its superstar product Lantus, the world’s most prescribed insulin, will lose patent protection by 2015.

The long-acting insulin, known as U300, requires less frequent or lower dosing than Lantus and offers a more consistent insulin release. It is similar to Novo Nordisk’s Tresiba (degludec), also in development.

Analysts expect Sanofi to seek regulatory approval for U300 in the United States and Europe next year and for the drug to reach global sales of $872 million by 2017, according to forecasts compiled by Thomson Reuters Cortellis.

The detailed Phase III results unveiled at the World Diabetes Congress in Melbourne showed U300 was better than Lantus at controlling blood sugar lows at night, a common side effect in diabetics treated with insulin.

The drug also lowered the incidence of hypoglycemic events at any time of the day across the six-month study period.

Lantus, also known as insulin glargine, was developed in the 1990s and is currently Sanofi’s top-selling drug. It reaped around 5 billion euros ($6.78 billion) in revenue last year.

Sanofi needs a successor for the drug and is also developing a pen-shaped device, known as LixiLan, that combines Lantus with Lyxumia, another diabetes treatment belonging to a class of drugs known as GLP-1 analogues.

The successful launch of both U300 and LixiLan could strengthen Sanofi against rival drugs such as Novo Nordisk’s Tresiba (degludec) and IDegLira, a combination of Tresiba and Victoza.

Novo Nordisk, the global leader in diabetes, faced a setback earlier this year when the U.S. Food and Drug Administration asked for further clinical studies for Tresiba, delaying its potential launch on the world’s largest pharmaceutical market until 2017 at the earliest.