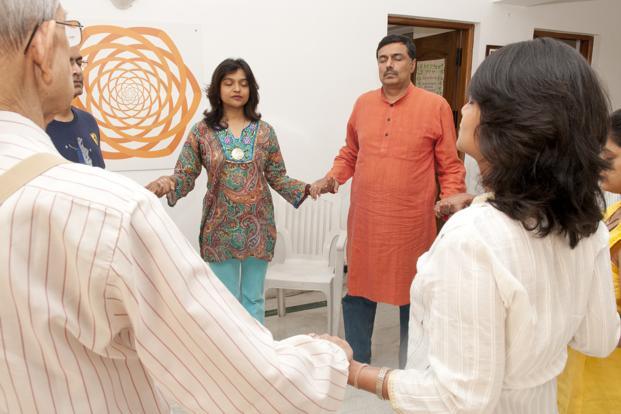 John Denninger, a psychiatrist at Harvard Medical School, is leading a five-year study on how the ancient practices affect genes and brain activity in the chronically stressed. His latest work follows a study he and others published earlier this year showing how so-called mind-body techniques can switch on and off some genes linked to stress and immune function.

While hundreds of studies have been conducted on the mental health benefits of yoga and meditation, they have tended to rely on blunt tools like participant questionnaires, as well as heart rate and blood pressure monitoring. Only recently have neuro-imaging and genomics technology used in Denninger’s latest studies allowed scientists to measure physiological changes in greater detail.
“There is a true biological effect,” said Denninger, director of research at the Benson-Henry Institute for Mind Body Medicine at Massachusetts General Hospital, one of Harvard Medical School’s teaching hospitals. “The kinds of things that happen when you meditate do have effects throughout the body, not just in the brain.”

The government-funded study may persuade more doctors to try an alternative route for tackling the source of a myriad of modern ailments. Stress-induced conditions can include everything from hypertension and infertility to depression and even the aging process. They account for 60-90% of doctor’s visits in the US, according to the Benson-Henry Institute. The World Health
Organization estimates stress costs US companies at least $300 billion a year through absenteeism, turn-over and low productivity.

The science is advancing alongside a budding mindfulness movement, which includes meditation devotees such as Bill George, board member of Goldman Sachs Group and Exxon Mobil Corp., and comedian Jerry Seinfeld. News Corp.  chairman Rupert Murdoch recently revealed on Twitter that he is giving meditation a try.

As a psychiatrist specializing in depression, Denninger said he was attracted to mind-body medicine, pioneered in the late 1960s by Harvard professor Herbert Benson, as a possible way to prevent the onset of depression through stress reduction. While treatment with pharmaceuticals is still essential, he sees yoga and meditation as useful additions to his medical arsenal.

It’s an interest that dates back to an exchange programme he attended in China the summer before entering Harvard as an undergraduate student. At Hangzhou University, he trained with a tai chi master every morning for three weeks. “By the end of my time there, I had gotten through my thick teenage skull that there was something very important about the breath and about inhabiting the present moment, he said. I’ve carried that with me since then.” His current study, to conclude in 2015 with about $3.3 million in funding from the National Institutes of Health, tracks 210 healthy subjects with high levels of reported chronic stress for six months. They are divided in three groups.

One group with 70 participants perform a form of yoga known as Kundalini, another 70 meditate and the rest listen to stress education audiobooks, all for 20 minutes a day at home. Kundalini is a form of yoga that incorporates meditation, breathing exercises and the singing of mantras in addition to postures. Denninger said it was chosen for the study because of its strong
meditation component.

Participants come into the lab for weekly instruction for two months, followed by three sessions where they answer questionnaires, give blood samples used for genomic analysis and undergo neuro-imaging tests.

‘Immortality enzyme’
Unlike earlier studies, this one is the first to focus on participants with high levels of stress. The study published in May in the medical journal PloS One showed that one session of relaxation-response practice was enough to enhance the expression of genes involved in energy metabolism and insulin secretion and reduce expression of genes linked to inflammatory response and
stress. There was an effect even among novices who had never practiced before. Harvard isn’t the only place where scientists have started examining the biology behind yoga.

In a study published last year, scientists at the University of California at Los Angeles and Nobel Prize winner Elizabeth Blackburn found that 12 minutes of daily yoga meditation for eight weeks increased telomerase activity by 43%, suggesting an improvement in stress-induced aging. Blackburn of the University of California, San Francisco, shared the Nobel medicine prize in 2009 with
Carol Greider and Jack Szostak for research on the telomerase immortality enzyme, which slows the cellular aging process.

Not all patients will be able to stick to a daily regimen of exercise and relaxation. Nor should they have to, according to Denninger and others. Simply knowing breath-management techniques and having a better understanding of stress can help build resilience.

“A certain amount of stress can be helpful,” said Sophia Dunn, a clinical psychotherapist who trained at King’s College London. “Yoga and meditation are tools for enabling us to swim in difficult waters.”