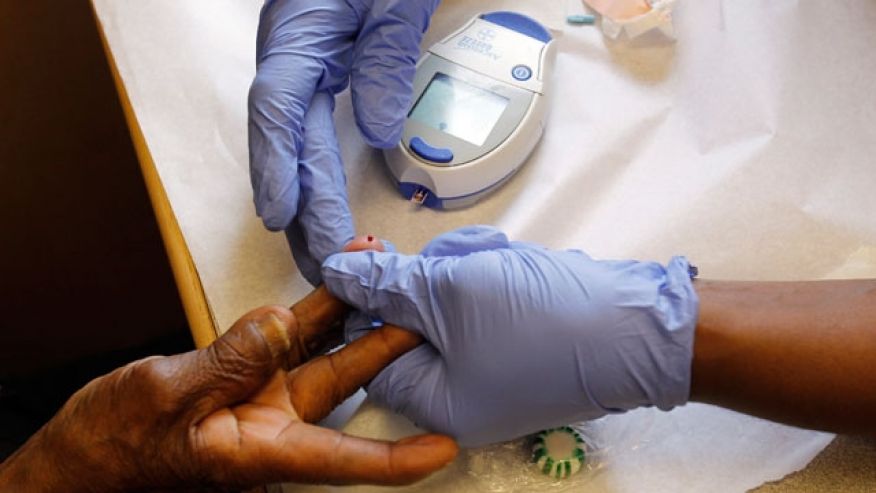 About 35 percent of U.S. adults with diabetes have some degree of kidney disease, and diabetes is the major cause of kidney failure and dialysis, according to the study’s lead author Dr. William C. Knowler.

“This result along with many others tends to reinforce the value of weight loss interventions and hopefully motivates people with diabetes to lose weight,” said Knowler, who is chief of the Diabetes Epidemiology and Clinical Research Section of the National Institute of Diabetes and Digestive and Kidney Diseases in Bethesda, Maryland.

He and his co-authors reexamined data from an existing study of lifestyle modifications for people with type 2 diabetes.

For the original study, more than 5,000 overweight or obese Americans with type 2 diabetes ages 45 to 76 were divided into two groups. Half received diabetes support and education and the other half aimed to lose seven percent of their body weight through reduced calorie diets and increased physical activity.

People were recruited for the study between 2001 and 2004. For the first year or so, the weight-loss group met regularly with dieticians, case managers and physical activity experts to stay on track toward their calorie, activity and weight-loss goals.

The study continued, with encouragement to stick to diet and exercise programs, through 2012. As with many weight loss programs, the first year is the critical period for weight loss and later years are spent maintaining it, which can be difficult, Knowler said.

At the one-year mark, the diet and exercise group had lost an average of 8.6 percent of their body weight, compared to less than one percent lost in the support-and-education group.

Over the entire study period, people in the diet and exercise group were 31 percent less likely to develop very high risk chronic kidney disease, according to urine tests.

The study’s primary aim was to investigate the power of weight loss to reduce the risk of heart problems or stroke, and as the researchers published previously, no benefit was seen there.

Knowler emphasized, however, that the weight loss program did improve the outlook for kidney disease and many other aspects of health, including depression, knee pain, urinary incontinence and heart rate recovery after exercise.

Dr. Dick de Zeeuw writes in an accompanying editorial in The Lancet Diabetes and Endocrinology that he found the kidney-health benefit with no heart benefit difficult to reconcile.

de Zeeuw, of the Hiddo Lambers Heerspink Department of Clinical Pharmacy and Pharmacology at the University of Groningen in Germany, also writes that using very high risk chronic kidney disease as the marker of success or failure in the study doesn’t line up with what most trials like this would do if a drug were being tested instead of a lifestyle change.

Nevertheless, these results reinforce the existing recommendation that people with type 2 diabetes should maintain a healthy weight, he told Reuters Health.

“In one sense it doesn’t add anything to existing recommendations because for overweight people, weight loss and increased activity are recommended already,” Knowler said. “But we don’t really put a lot of force behind that recommendation.”

For most people, telling them to lose weight and handing out some pamphlets is not enough, he said. This study indicates that an intense program of major behavioral change, including counseling, group session and mutual reinforcement can work.

“Any approach that results in sustained weight loss should work just as well,” Knowler said.