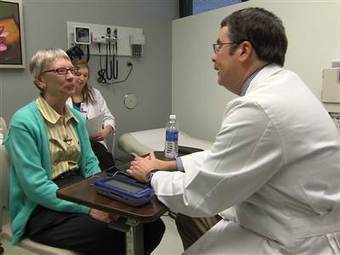 Researchers have made a new breakthrough which may not only help diagnose Alzheimer`s, but also assess its severity

Researchers have made a new breakthrough which may not only help diagnose Alzheimer`s, but also assess its severity.

Patients with Alzheimer`s disease currently undergo neuropsychological testing to detect signs of the disease. The test results are difficult to interpret and are insufficient for making a definitive diagnosis.

But as scientists have already discovered, activity in certain areas of the cerebral cortex is affected even in the early stages of the disease. Professor Tiago H. Falk of INRS`s Centre Energie Materiaux Telecommunications, specializing in biological signal acquisition, examined this phenomenon and compared the electroencephalograms (EEGs) of healthy individuals (27), individuals with mild Alzheimer`s (27), and individuals with moderate cases of the disease (22).

He found statistically significant differences across the three groups.

Falk said that what makes this algorithm innovative is that it characterizes the changes in temporal dynamics of the patients` brain waves.

The study has been published in the journal PLOS ONE.