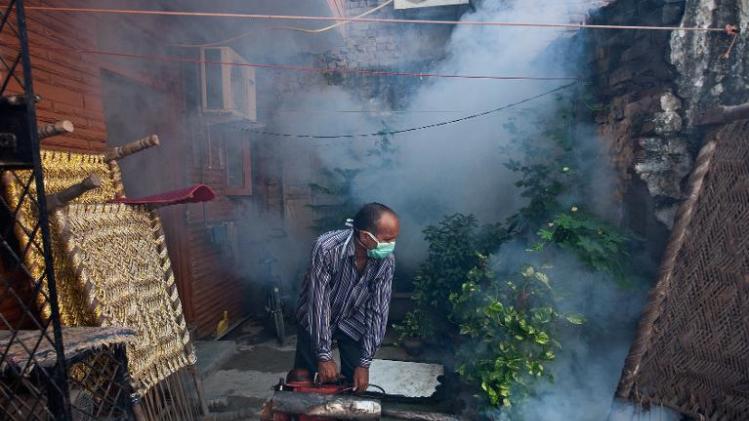 Factory worker Mohammad Awwal is gripped by fever, sweats and the sort of agonising aches that mean his condition is sometimes called “breakbone disease”. It’s an annual plague in India and a hidden epidemic, say experts.

Dengue fever is a mosquito-borne disease with no known cure or vaccination that strikes fear into the citizens of New Delhi when it arrives with the monsoon rains — just as the scorching heat of the summer is subsiding.

Hospital wards are overwhelmed and tales abound of deaths and cases while New Delhi public authorities insist that only 3,500 have fallen sick so far this year — with only five fatalities.

“I took him first to a government hospital. I was shocked to see that it was packed with dengue patients. There was not even a single bed available,” said Awwal’s mother, Mehrunissa, sitting in her one-room shack in east Delhi.

She is now treating him at their home, giving him multi-vitamins, paracetamol and water as he lies on the floor with two pillows and a bedsheet but no mattress.

In a sign that this year’s outbreak could be as bad as record-breaking 2010, the city’s largest public hospital, Hindu Rao, announced earlier this month that it had suspended all routine surgeries to make room for more dengue patients.

The Delhi government has blamed prolonged monsoons for the hike in infections, but says it has added beds at hospitals and increased resources for spraying insecticides to tackle the mosquito menace.

“It’s nothing to worry about, there is no crisis,” Charan Singh, additional director of Delhi health services, told AFP, dismissing allegations that the city of 17 million under-reports the problem.

“It is a lot of hype going on… The government is in action and we report all cases according to international guidelines,” he added.

Fear of a panic?

The virus — first detected in the 1950s in the Philippines and Thailand — affects two million people across the globe annually, with the number of cases up 30 times in the last 50 years, according to the World Health Organisation.

Transmitted to humans by the female Aedes aegypti mosquito, it causes high fever, headaches, itching and joint pains that last about a week. There are four strains, one of which can cause fatal internal bleeding.

In India, cases have increased sharply over the last five years — there have been 38,000 so far in 2013 — but doctors say these numbers only capture part of the problem.

At the All India Institute of Medical Sciences (AIIMS), India’s most prestigious public hospital, doctors are overwhelmed by patients whose beds are squeezed together like Tetris tiles in the emergency ward with saline drips nailed to the walls.

Medics, speaking on condition of anonymity, told AFP that they were seeing 60 new dengue patients a day — an influx they suspected was not reflected in the official figures.

The former health chief at the Municipal Corporation of Delhi (MCD) said that only positive results from one of the two standard dengue tests — known as ELISA test — was registered.

“There is gross under-reporting of these cases every year. I believe the real numbers are always three times higher than those projected by the MCD,” V.K. Monga told AFP.

Sandeep Budhiraja, internal medicines director at private Max Healthcare hospital in Delhi, blamed city authorities for failing to be prepared and said cases would only decline with the onset of winter next month.

“It’s an epidemic that hits the country every year, yet there is never any preparedness by officials. It just keeps getting worse,” said Budhiraja, adding that Max had opened its fever wards to accommodate dengue patients.

‘No luck’ with treatments

While dengue is painful and debilitating, death is usually rare but patients are vulnerable to other fatal viral infections during or shortly after the time of illness.

There is still no specific treatment, but last year French healthcare giant Sanofi Pasteur said it would begin tests for a dengue vaccine in India before making it available internationally by 2015.

A leading Brazilian biomedical research institute, Butantan, also said last month it was working on a new dengue vaccine that they hoped would be ready by 2018.

The only defence so far is preventive steps, like removing stagnant water near residential areas, spraying insecticide, applying mosquito repellent and wearing long sleeves and trousers.

Many victims in India gulp down papaya-leaf juice believing it to boost blood platelet levels, which are decimated by the virus.

“It is a largely preventive, self-limiting virus, but we still hardly invest in research for treatments,” said Budhiraja from Max Healthcare.

“There are only some vaccines being tried out, but no luck yet.”
Read more: http://newsinfo.inquirer.net/510759/delhi-hospitals-overflow-with-hidden-dengue-epidemic#ixzz2iKXoWyCi