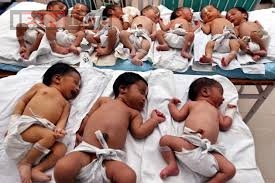 Researchers have found that the mode of delivery could make an imprint in the stem cells of the newborn infant. The finding may help explain why individuals born by cesarean section statistically have an increased risk of immunological diseases, researchers said.

“The biological mechanisms predisposing a foetus or a newborn infant to get a certain disease later in life are complex and depend on both genetic and environmental factors during formative years,” said Tomas Ekstrom, Professor of Molecular Cell Biology at Karolinska Institutet in Sweden.

“In this study, our focus has been whether the way a baby is born can have an impact on a cellular level in the form of epigenetic alterations in DNA,” Ekstrom said.

Epigenetic changes in the DNA of the cell nucleus occur when environmental factors affects the way the genes are encoded without altering the actual genetic code.

Thus, genes can be switched on and off to adapt body functions following the necessities of the surrounding environment.

In the current study, published in the American Journal of Obstetrics and Gynecology, researchers investigated epigenetic alterations in stem cells from sorted cord blood.

“During a vaginal delivery, the foetus is exposed to an increased level of stress, which in a positive way will prepare the unborn baby for life outside the uterus,” said Mikael Norman, Professor of Neonatology.

“This activation of the foetus’ defense systems doesn’t occur when a cesarean section is performed before labour begins, which in turn could be a possible cause for the noticed differences between the groups,” Norman said.

Researchers cautioned that it is still unknown whether the differences that were found in the studied babies remains over a longer period of time, and thus actually have an impact on future disease risk.