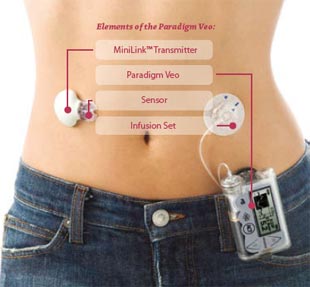 A portable artificial pancreas built with a modified iPhone successfully regulated blood sugar levels in a trial with people who have Type 1 diabetes, researchers reported Sunday.

Type 1 diabetes, which usually starts in childhood or young adulthood, is a chronic condition in which the pancreas produces little or no insulin, the hormone that lowers blood sugar levels. Insulin works in conjunction with glucagon, a hormone that raises blood sugar. Together, they keep blood sugar in a healthy range.

Currently about one-third of people with Type 1 diabetes rely on insulin pumps to regulate blood sugar. They eliminate the need for injections and can be programmed to mimic the natural release of insulin by dispensing small doses regularly.

But these pumps do not automatically adjust to the patient’s variable insulin needs, and they do not dispense glucagon. The new device, described in a report in The New England Journal of Medicine, dispenses both hormones, and it does so with little intervention from the patient.

“The data address some of the most difficult problems in diabetes management,” said Dr. Kevan Herold, director of the Yale Diabetes Center, who was not involved in the study. “I’d say that the effects are quite significant and noteworthy.”

Dr. Fredric E. Wondisford, director of the diabetes institute at Johns Hopkins, also found the results encouraging. “To me, it’s a clear advance,” he said. But he cautioned that the effectiveness and practicality of the device had still not been tested in large numbers of patients over long periods of time. He also raised the issue of cost and insurance coverage.

Treatment of Type 1 diabetes is complicated. Patients not using pumps need two or more insulin injections a day, and all have to monitor blood sugar several times a day by pricking their skin and testing their blood.

For patients with adequate treatment, elevated blood sugar is usually not an emergency, but can cause vascular damage over time that can lead to eye problems and amputations.

The artificial pancreas is the latest version of a device that researchers have been refining for several years. The system consists of an iPhone 4S with an attached glucose monitoring device, two pumps, and reservoirs for insulin and glucagon.

A sensor implanted under the skin on one side of the patient’s abdomen measures the glucose in the fluid between the cells, which corresponds closely to blood glucose levels. The sensor delivers the reading to the smartphone, and the phone’s software calculates a dose of insulin and glucagon every five minutes.

The medicine is then pumped through thin tubes to two tiny infusion points embedded just under the skin on the other side of the patient’s abdomen.

The phone also has an app with which a patient can enter information immediately before eating, indicating whether the meal is breakfast, lunch or dinner, and whether the carbohydrate content will be small, large or typical. The device then calculates and dispenses the proper dosages.

The developers tested the device over five days in two groups of patients, 20 adults and 32 adolescents, comparing the results with readings obtained with conventional insulin pumps that the participants were using.

The adults in the trial each had the constant attention of a nurse, and they lived in a hotel for the five-day study. Most of the time they were free to travel around and pursue normal activities.

The adolescents, 16 boys and 16 girls, lived under supervision in a summer camp for youths with diabetes.

“We need to do a true home-use study, give people the device and send them home,” said the lead author, Dr. Steven J. Russell, an assistant professor of medicine at Massachusetts General Hospital. “Let them do whatever it is they’re going to do without supervision.”

The artificial pancreas performed better than the conventional pump on several measures. Among the adolescents, the average number of interventions for hypoglycemia was 0.8 a day with the experimental pump, compared with 1.6 a day with the insulin pumps. Among adults, the device significantly reduced the amount of time that glucose levels fell too low.

And the artificial pancreas worked well at calculating mealtime doses without the patient having to use (often inaccurate) estimates and correct a too high or too low reading after eating.

Much more work needs to be done before the device can be marketed, Dr. Russell said. The senior author, Edward R. Damiano, an associate professor of biomechanical engineering at Boston University, has a 15-year-old son with Type 1 diabetes. He said he was determined to get the new device working and approved in time for his son to go off to college carrying one.