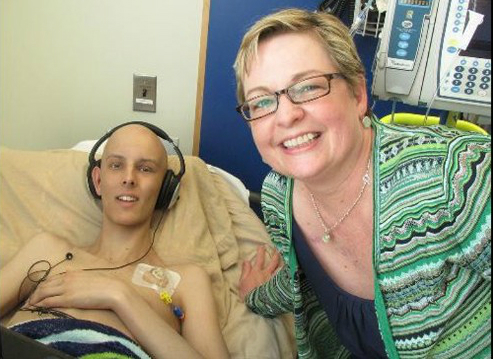 Three years ago, I was diagnosed with a rare pediatric bone cancer called osteosarcoma. In my case, it was super-rare, because I was 43.

I went to see Dr. Paul Meyers at Memorial Sloan Kettering Cancer Center in New York, six hours away from our home in upstate New York. At the hospital, my husband and I followed instructions to the B elevators and got off on the eighth floor.

Meyers explained, sans sugar-coating, that my cancer was particularly aggressive, and so the treatment would be, too. I explained that I loved my job and my life, and am one tough chick, so I planned on working through it all.

Meyers pressed on. I would endure nine rounds of three types of chemotherapy in a not-so-delicious-chemo cocktail. After three rounds, there would be limb-salvage surgery where they remove my cancerous bones and replace them with titanium. Or amputate.

I should expect to be fully debilitated by this treatment, Meyers said — to be in a wheelchair for more than a year, to stop working at my job that I loved, and to close my company that I had worked hard to build. Long-term damage to my hearing, heart, bladder and extremities because of high doses of chemo were to be expected.

At the time, I was unsure of almost everything, including how I felt about being in the Pediatric Day Hospital as a patient.

We learned the hospital would be my home away from home during my nearly yearlong treatment. I spent at least one week of every month with the sickest people you can imagine. Little people with no hair, missing limbs and treacherous looking scars; it was harrowing at first.

Then I became one of them: No hair. Giant, treacherous scar. Wheelchair. Ever-present IV pole, and dusty-rose colored kidney-shaped bowl to throw up in. These were all outward signs of a fraternity of warriors that no one wants to belong to. They all were enduring the same grueling treatment I was — only they were, on average, 10 years old.

This fraternity of Cancer Avengers was wise in ways beyond their years. When faced with the courage and bravery of these little superheroes, I had to give myself the “Put your big girl pants on” speech more than once.

On my first day of treatment, while I was scrolling through my Facebook feed by the fish tank, two boys next to me started discussing their Make-A-Wish requests. Adam, about 12 years old, had just returned from a rainforest trip and asked what Sam’s wish was going to be. Sam said they couldn’t give him what he wished for. Adam disagreed, enthusiastically conveying that any wish could be granted. Sam stood firm: It was not possible.

“I want normal,” was Sam’s answer. “I want to go to school and basketball practice, complain about my parents and homework and turn 12.”

Silence from Adam. Silence all around. Even a superhero knows when he is defeated.
I looked down at my phone, trying to distract myself and read through my tears. A Facebook friend was complaining about turning 44. In the moment, it was like complaining about being too rich or having too much food to eat. My friend had been granted 32 more years than this kid dared dream of living. So had I.