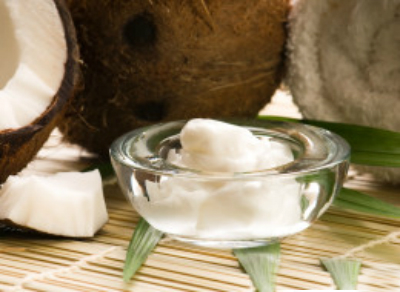 A secret weapon that you may like to use in your own personal war against sugar. It stops cravings in their tracks but also deals with mid-afternoon energy slumps. Ready for it? It’s coconut oil.

Take it a tablespoon at a time

Eat it directly after lunch. Or mix it with a little raw cacao powder to make the simplest chocolate snack

It kills sugar cravings, immediately.
How so? Coconut oil is made up of medium-chain fatty acids, or medium chain triglycerides (MCTs). Indeed, coconut oil is nature’s richest source of MCTs. These fatty acids produce a host of health benefits which you can read about here. But here’s the bit I like: your body sends medium-chain fatty acids straight to your liver to use as energy. This means coconut oil is a source of instant energy, much like sugar and other simple carbohydrates. But although both deliver quick energy to your body, unlike the carbohydrates, coconut oil does not produce an insulin spike in your bloodstream. This saves you from a slump, and is really good news for anyone struggling with insulin issues. Like me.

It fills you up, immediately.
After two tablespoons I’m not hungry for about four hours.

And bonus: it helps you lose weight!
Again, it’s the medium-chain fatty acids. Most plant oils are made up of longer chain fat triglycerides (LCTs). LCTs are typically stored in the body as fat; MCTs are transported directly to the liver, promoting “thermogenesis” which increases the body’s metabolism. There are a stack of studies that have shown this to be the case, like this one. This study shows eating two tablespoons of coconut oil with a meal caused body temperature to rise, boosting metabolism. Plus, MCTs are not easily converted into stored triglycerides and cannot be readily used by the body to make larger fat molecules.