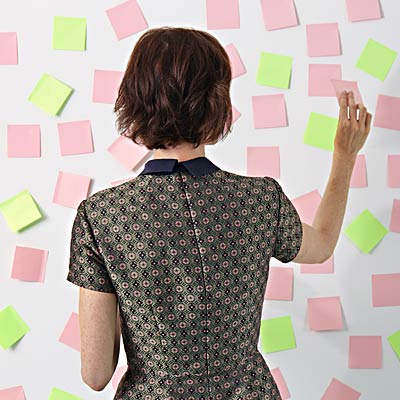 You regularly ransack the house to find your keys. You suddenly can’t recall the name of your kid’s teacher. You made your six-month dentist appointment three months late. Sound familiar? Fear not: most forgetfulness isn’t anything serious, says Majid Fotuhi, MD, PhD, founder and chief medical officer of NeurExpand Brain Center in Luterville, MD and co-author of The Memory Cure. Lack of sleep, certain medications, and even stress can impact your memory. “Fortunately, your brain is malleable, meaning it changes and improves,” says Dr. Fotuhi. “Memory can be boosted with simple powerful interventions.” Here are surprising things that impact your memory in both good and not-so-good ways.

A dysfunctional thyroid
When your thyroid’s out of whack, you may feel too hot, too cold, anxious, depressed—and your memory may also be lagging. “Although the thyroid doesn’t have a specific role in the brain, memory loss is the one thing a person notices when it stops functioning normally,” says Dr. Fotuhi. A butterfly-shaped gland that sits along the front of your windpipe, the thyroid reigns over almost all your body’s metabolic processes. “People with high or low thyroid levels—which are very common in women—may have difficulty with memory and concentration,” he says. Ask your doctor for a simple thyroid test to determine if it’s the culprit behind your memory problems.

Hot flashes
Every time hot flashes make you you feel like sticking your head in the freezer, you may also feel a fog rolling into your brain. “The more hot flashes a woman experiences during menopause, the worse her ability to remember names and stories,” says Dr. Fotuhi. “Fortunately, hot flashes don’t damage the brain in any way. Memory improves once the hot flashes subside.” Other menopause-related symptoms contribute to memory loss, including insomnia and sleep apnea, Dr. Fotuhi says.

Lack of sleep
Last night’s late party makes it less likely you’ll remember your new coworker’s name the next day. “While some part of the brain takes a siesta when we sleep, deeper areas involved with memory and emotional response become relatively more active,” says Allen Towfigh, MD, medical director of New York Neurology & Sleep Medicine. “Individuals with sleep deprivation and sleep disorders not only suffer from impaired memory but also daytime fatigue, impaired attention, and reduced reaction time.” The standard recommendation of eight hours of sleep a night doesn’t necessarily work for everyone. If you wake up fatigued and fall asleep unintentionally during the day, then you may need more sleep, says Dr. Towfigh.

Anxiety and depression
Worrying about an upcoming presentation in front of the CEO may also hinder your memory, several studies show. “We don’t understand the exact link, but strong evidence indicates depression, anxiety, and bipolar disease disrupts the neural circuitry involved in developing and retrieving memories,” says Dr. Towfigh. “The severity of the memory loss often mirrors the severity of the mood disorder—severe depression brings about equally severe memory loss.” Prolonged periods of everyday stress increase cortisol levels in the brain, which causes our brain cells to lose synapses (the bridges that connect our brain cells to one another), and make it more difficult to create and retrieve memories. The good news is when memory loss exists with a mood disorder (including anxiety and depression), the memory loss is usually at least partially reversible. “As the individual’s mood improves, often so does the memory loss,” says Dr. Towfigh

Prescription drugs
Check your medicine cabinet: many common prescription drugs can make you feel forgetful. Anxiety disorder meds like Xanax, Valium, and Ativan (which are benzodiazepines) put a damper on the part of the brain that moves events from the short-term to the long-term memory. Tricyclic antidepressants have a similar effect. Heart medicines including statins and beta blockers have also been linked to memory issues, as have narcotic painkillers, incontinence drugs, sleep aids, and even antihistamines like Benadryl. Bottom line: Don’t stop taking your (potentially life-saving) medications, but talk to your doc if you believe any drug you’re on may be messing with your memory.

Smoking
If you’re still smoking, that may help explain memory lapses. “Smoking damages the brain by impairing its blood supply,” says Dr. Towfigh. Research published in the Archives of General Psychiatry gathered from data obtained from more than 7,000 men and women found a more rapid decline in brain function (which included memory along with vocabulary and other brain functions) with age than from those who never smoked. “Furthermore, cigarette smoking promotes the accumulation of abnormal proteins which impair the brain’s ability to process and relay information

A high-fat diet
Greasy burgers and French fries pack on pounds and are hard on your heart—and they may also cause memory issues. One study revealed that adolescent mice had poorer learning and memory skills after being fed a high-fat diet for eight weeks, while another study on middle-aged rats found that the hippocampus (the part of the brain responsible for short-term memory) may be particularly vulnerable to the impact of high-fat diets.

More research is needed to determine for sure whether or not high-fat diets impact human memory, but here’s what we do know: Calorically dense diets promote type 2 diabetes, hypertension, and cardiovascular disease, which can all do damage to our brains, says Dr. Towfigh. “This holds true earlier in life, too. Studies link childhood obesity with a reduced attention span and impaired concentration and focus.”

Stress
A sudden emergency can make it tough to recall something as simple as your home address. A rat study published in Neuron shows that stress hormones influence an area of the brain area that controls working memory. Researchers found that repeated stress reduced receptors in the part of the brain that’s connected to thought processes Although this study involved animals, the human brain works similarly, explains Dr. Towfigh. “Repeated or chronic stress can be harmful. Regular exposure to elevated glucocorticoids (a hormone released by the adrenal gland) also causes our brain cells to reduce receptors, making brain cells less capable of responding to neurochemical (brain chemicals) cues.” Finding ways to relieve stress may help: Practicing meditation does double duty by easing stress and helping improve memory, according to a study from the University of California, Santa Barbara. College students who completed eight 45-minute meditation sessions over two weeks increased their average GRE exam scores from 460 to 520 and showed improvement on tests of working memory.

Germs
A nasty cold sore does more than make you feel self-conscious—it may be messing with your memory, according to a 2013 study in Neurology. Researchers found that people who exposed to many germs, such as herpes simplex type 1 (the cold sore virus), over their lifetimes were more likely to have memory problems than those exposed to fewer germs. Among more than 1,600 study participants, those with a higher “infectious burden” had a 25% increase in the risk of a low score on a cognitive test. Although there is no vaccine for the cold sore virus, childhood vaccinations against other viruses could help prevent problems later in life, the researchers suggest. In addition, regular exercise may help too—doctors think repeated infections may damage blood vessels, since a high infectious burden is also linked to a greater risk of stroke and heart attack.

Green tea
Now for some good news: chemicals found in green tea may help improve your memory, according to a University of Basel study. “Several compounds, EGCG and L-theanine, in green tea increase neurogenesis (growth of new brain cells) in the hippocampus, the part of the brain used for short-term memory and learning new things,” says Dr. Fotuhi. How much green tea has not yet been determined, says Dr. Fotuhi, who recommends combining green tea with other healthy habits such as exercise for greatest memory improvement benefits.