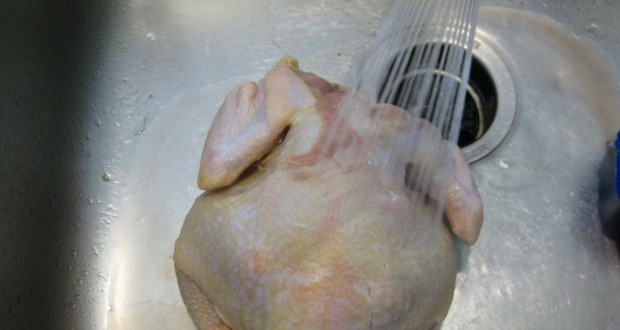 Consumers are being warned to stop washing raw chicken as doing so increases the risk of food poisoning. An online survey of 4,500 UK adults by the Food Standards Agency (FSA) found 44% washed chicken before cooking.

But it warns this spreads campylobacter bacteria onto hands, work surfaces, clothing and cooking equipment, through the splashing of water droplets. Campylobacter affects about 280,000 people in the UK each year but only 28% in the FSA survey had heard of it.

Only a third of them knew that poultry was the main source of the bacteria. Jump media playerMedia player helpOut of media player. Press enter to return or tab to continue. However 90% had heard of salmonella and E. coli.

The most commonly cited reasons for washing chicken were to remove dirt or germs, or because they had always done it.

Cross-contamination
Campylobacter is the most common form of food poisoning in the UK. The majority of cases come from contaminated poultry. Symptoms include diarrhoea, stomach pains and cramps, fever, and generally feeling unwell.

Most people are only ill for a few days, but it can lead to long-term health problems, including irritable bowel syndrome and Guillain-Barre syndrome, a serious condition of the nervous system.

It can also kill. Those most at risk are children under five and older people. FSA chief executive Catherine Brown said: “Although people tend to follow recommended practice when handling poultry, such as washing hands after touching raw chicken and making sure it is thoroughly cooked, our research has found that washing raw chicken is also common practice.

“That’s why we’re calling on people to stop washing raw chicken and also raising awareness of the risks of contracting campylobacter as a result of cross-contamination.

“Campylobacter is a serious issue. Not only can it cause severe illness and death, but it costs the economy hundreds of millions of pounds a year as a result of sickness absence and the burden on the NHS.”

She said the FSA was also working with farmers and producers to try to reduce the rate of campylobacter in broiler chicken flocks and with slaughterhouses and processors to minimise the levels of contamination in birds.