A woman who complained of a rapidly expanding waistline was surprised to discover an unusual cause of her girth: an 88-lb., mucus-filled ovarian tumor.

The 57-year-old Brazilian woman noticed her midsection grew over the course of a year, but other than a heavy feeling in her belly, and breathing that was slightly faster than normal, she had few other symptoms, according to a report of her case, published March 4 in the Journal of Medical Case Reports.

The woman — an overweight, postmenopausal 57-year-old from Brazil — first contacted doctors about her rapidly growing waistline in 2003. She had slightly shallow breathing, and a 52-inch (132 centimeters) waistline.

An ultrasound of her stomach revealed a huge, mucus-filled mass. The tumor was so big that it had shoved her uterus to the side, squished her abdominal contents and extended all the way up to her diaphragm.

The tumor had some signs of early-stage cancer, so the woman underwent several rounds of chemotherapy. Surgeons also removed part of her fallopian tubes, uterus and lymph nodes.

Ten years later, the patient is doing fine and has no more symptoms. Though it’s unusual for such masses to grow so large, Herman said he has seen similar cases. He once operated on a young woman whose ovarian cyst grew to between 20 and 25 lbs. (9 to 11 kg).

“I had to roll it off the table; it was so heavy,” Herman said. Women may miss the symptoms of ovarian cysts because they think they’re just putting on weight, he said. 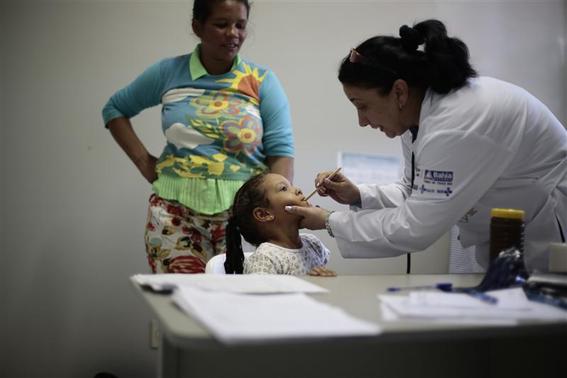 They were heckled and called slaves of a communist state when they first landed, but in the poorest corners of Brazil the arrival of 5,400 Cuban doctors is being welcomed as a godsend.

The programme to fill gaps in the national health system with foreign doctors, mainly from Cuba, could become a big vote-winner for President Dilma Rousseff as she eyes a second term in next year’s election despite fierce opposition from Brazil’s medical class.

Within weeks, she launched “Mais Médicos”, or “More Doctors”, a programme to hire foreign physicians. Brasilia signed a three-year contract to bring thousands of Cuban doctors to work in poor and remote areas where Brazilian physicians prefer not to practice.

Under an agreement that will earn cash-strapped Cuba some US$225 million (RM725 million) a year, Cuban doctors have been deployed to health centres in the slums of Brazilian cities and villages across the drought-stricken Northeast that had no resident doctors. Bahia state is reopening rural health centres that were unstaffed.

Inhabitants of Jiquitaia, a hamlet surrounded by cacti, goats and famished cattle in Bahia’s interior, no longer have to travel 46km on a dirt road to see a physician.

“This is a gift of God,” said farm worker Deusdete Bispo Pereira after he was seen for chest pains by Dania Alvero, a doctor from Santa Clara, Cuba. “Everyone is happy she is here. We’re afraid she will be sent away,” he said.

Elderly residents and pregnant women crowded into the family health centre waiting for a check-up with Alvero, who like many Cuban doctors is an expert in preventive medicine.

“There are illnesses here that I had only read about in books, like leprosy, which no longer exists in Cuba,” she said mixing Spanish and Portuguese words.

Cuba has sent doctors abroad for decades to help developing countries for ideological reasons, revolutionary foot soldiers first sent out by Fidel Castro onto a Cold War chessboard, from Algeria and Ethiopia to Angola and Nicaragua.

Plunged into economic crisis after the Soviet Union collapsed, Castro devised a doctors-for-oil scheme with the late Venezuelan leader Hugo Chavez in 2000.

The so-called Barrio Adentro plan, in which more than 30,000 Cubans work in healthcare in dirt-poor shantytowns ringing Caracas and other cities, earned Chavez loads of political goodwill among the Venezuelan populace and was paid for with preferential oil shipments to Cuba.

Even though most of the income goes to the Cuban government, Cuban doctors are delighted to go abroad because they can earn much more than they are paid at home, where doctors’ salaries max out at the equivalent of US$50 a month.

“We don’t get paid much, but we are not here for the money. We are here to help our country, which is poor,” said Lisset Brown, who works at a neighbourhood health centre in Ceilandia, the largest slum ringing the Brazilian capital of Brasilia.

The arrival of 12 Cuban physicians has relieved the overburdened Ceilandia hospital and improved the credibility of the public health system, said Brazilian nurse Tania Ribeiro Mendonça. “People see the government is doing something.”

Cuba has doctors to spare today. According, to the World Bank, it has the world’s highest number of doctors in proportion to population: 6.7 per 1,000 people, compared to 1.8 in Brazil, though that ratio rises to 4 per 1,000 in cities where Brazilian doctors prefer to work, such as Sao Paulo and Rio de Janeiro.

Brazilian doctors initially tried to stop the arrival of foreign colleagues, which they saw as an attempt to undermine their professional interests and medical standards.

When an early contingent of Cubans arrived at Fortaleza airport in northern Brazil in August, angry Brazilian doctors shouted “Slaves!” at them.

But they have had to tone down their criticism because opinion polls show that a vast majority of Brazilians favours hiring foreigners when local doctors are unavailable, even though doubts remain about the qualifications of the Cubans.

One poll in November showed that 84.3 per cent of those surveyed back the Mais Médicos programme, though only 66 per cent thought the foreign doctors were qualified to do the job.

“We are not opposed to foreign doctors working here. They can come from Russia, England, Cuba or Bolivia but their degrees must be evaluated and the government is not doing that,” said Florentino Cardoso, head of the Brazilian Medical Association.

Cardoso, a cancer surgeon, complained that Rousseff has “demonised” Brazilian doctors by associating them with the many shortcomings of Brazil’s healthcare system. Putting more doctors in outlying areas, he said, will not end lines for underfunded medical services in the cities.

To allow foreign doctors to work in Brazil, Rousseff rushed through legislation allowing them to practice for three years without getting their degrees validated by local authorities, a cumbersome process that can take years. The law, however, says they can only work in basic healthcare services.