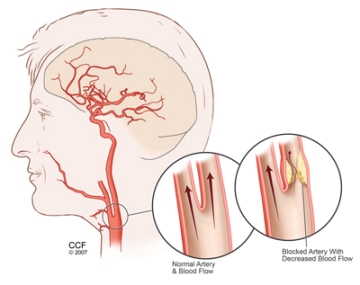 Blockage of the carotid artery in the neck appears to increase the odds for memory and thinking problems, a new study indicates.

The researchers said their findings suggest more aggressive treatment might be needed for people with this condition, which is caused by plaque buildup in the artery.

The study is to be presented Wednesday at the American Academy of Neurology (AAN) annual meeting in Philadelphia.

“To date, the focus of diagnosis and management of carotid artery blockages has been prevention of stroke since that was the only harm that these blockages were thought to cause to patients,” Dr. Brajesh Lal, of the Baltimore VA Medical Center and the University of Maryland School of Medicine, said in an AAN news release.

“These results underscore the importance of assessing the status of memory and thinking in people with carotid artery narrowing,” Lal added.

In conducting the study, the researchers examined 67 people with symptomless carotid narrowing, or stenosis. For these participants, the diameter of their artery was cut in half. The study also included 60 people who did not have carotid blockage but did have risk factors, such as diabetes, high blood pressure, high blood cholesterol and coronary artery disease.

They found participants with carotid blockage performed much worse on the thinking tests. They also scored lower on motor and processing speed evaluations as well as learning and memory tests. The researchers said language scores did not differ between the two groups of participants.

“If these findings are confirmed in larger studies, they hold significant implications for new treatment targets and open the door for more questions such as: should these patients be treated more aggressively with medications, cognitive rehabilitation, or even surgery to open up the artery,” Lal said in the association news release.

He said he anticipates follow-up studies searching for causes and the best treatment options.