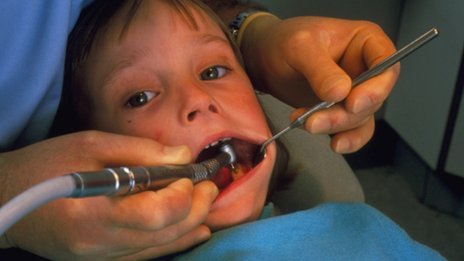 More than one in 10 three-year-olds have tooth decay, the first survey of the age group shows. Public Health England researchers checked the teeth of nearly 54,000 children at nurseries, children’s centres and playgroups.

They found 12% of children had evidence of tooth decay. These youngsters had an average of three teeth that were decayed, missing or filled. Large variations were found from place to place in the study.

In one area – Leicester – 34% of children had tooth decay whereas in others it was only 2%. Researchers also said that some children had a particular type of decay known as early childhood caries. This affects the upper front teeth and spreads quickly to other teeth. It is linked to the consumption of sugary drinks in baby bottles or sipping cups. PHE said that parents should give their children sugary foods and drinks in smaller quantities and less often. It also urged them not to add sugar to weaning foods or drinks.

Parents and carers should also start brushing children’s teeth as soon as the first tooth appeared and supervise their brushing until they the age of seven or eight, PHE said. Previous research by the organisation has shown that by the age of five, one in four children has tooth decay.

Anaesthetic
Sandra White, director of dental public health at PHE, said while there had been “significant improvements” in oral health over the years, the findings were worrying.

“Tooth decay is an entirely preventable disease which can be very painful and even result in a child having teeth removed under general anaesthetic, which is stressful for children and parents alike.” Dr Christopher Allen, of the British Dental Association, said: “Parents and carers may feel that giving sugar-sweetened drinks is comforting, but in reality it’s more likely to cause pain and suffering as it is the major cause of tooth decay in toddlers.

“It’s never too soon to take your toddler to the dentist – ideally no later than 18 months – because dentists can identify and treat tooth decay at the earliest stage and advise parents on tooth brushing and prevention.” 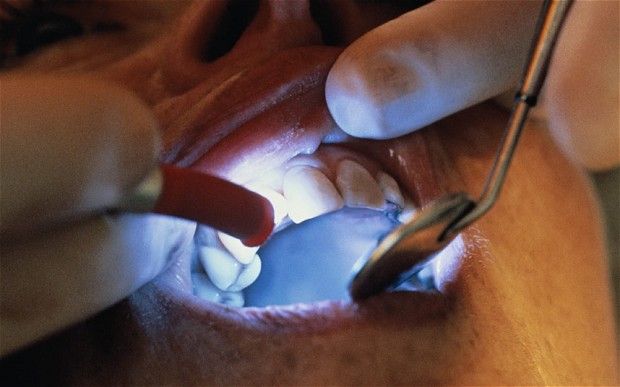 Rotting teeth is the most common cause of primary school aged children being admitted to hospital, new figures show

Almost 26,000 primary school children were treated for tooth decay in the past year, making it the most common reason youngsters are admitted to hospital, research shows.

Nearly 500 children aged five to nine were hospitalized due to rotten teeth each week in 2013-14. In some cases dentists are forced to remove all 20 baby teeth from their young patients.

The figures sparked further calls for a crackdown on sugary drinks and fruit juice. The number of hospital admissions for five to nine-year-olds with dental problems increased by more than 3000 in the just three years, from 22,574 in 2010-11 to 25,812 in 2013-14, according to the Health and Social Care Information Centre.

Graham Barnby, honorary vice-president of the British Dental Health Foundation, said: “It all relates to the consumption of sugary, fizzy drinks.” Kathryn Harley, a consultant in paediatric dentistry, said: “We have children who require all 20 of their baby teeth to be extracted. It beggars belief that their diets could produce such a drastic effect.”

She added: “They are going into hospital because they are either presenting with acute problems with pain or because the stage of dental disease, the number of teeth with decay, is such that they need a general anaesthetic.”
Ms Harley said most children need four to eight teeth removed but that having ten to 14 extracted is not uncommon.

She claimed fruit juice should be banned in schools to prevent the problem worsening and pointed the finger at parents who were “inadvertently responsible”.

NHS England also urged parents to take action to protect their childrens’ dental health. “We have some of the lowest rates of tooth decay in the world but these statistics are of course worrying,” the health body said in a statement.

“Parents of young children should discourage them from drinking fizzy drinks as this can lead to tooth decay.” The rising number of young tooth decay patients has also raised questions about whether dentists should carry out more childhood fillings.

Professor Jimmy Steele, head of the dentistry school at Newcastle University, said some dentists are unwilling to carry out filling due to uncertainty about their effectiveness.

They prefer to monitor decay in the baby teeth, he claimed. “Dentists are much less likely nowadays than they used to be to try to fill teeth using conventional measures,” he said.