Scientists have discovered that overweight teenagers who eat too much salt have shorter telomeres, the ends of the chromosome which protect the cells from harm

Eating too much salt may speed up the ageing process, scientists have discovered for the first time.
Although sodium is known to raise the blood pressure, which can lead to fatal heart attacks and strokes, it is the first time it has been linked to cellular ageing.

Scientists found that overweight or obese teenagers who had a high salt diet had shorter ‘telomeres’ – the protective caps at the end of chromosomes – compared with those who ate a low salt diet. Telomeres have been compared with the plastic tips that stop shoe laces fraying.

Each time a cell divides the telomeres get shorter and when they get too short the cell stops dividing and dies.

The same genetic process has been linked to conditions associated with old age such as heart disease, cancer, type-2 diabetes and dementia. High levels of body fat were already known to hasten the shortening of telomeres.

But the new study found that sodium in salt seems to work hand-in-hand with obesity to speed the effect up still further.
Lead scientist Dr Haidong Zhu, from Georgia Regents University in Augusta, US, said: “Even in these young people, we can already see the effect of high sodium intake, suggesting that high sodium intake and obesity may act synergistically to accelerate cellular ageing.

“Lowering sodium intake, especially if you are overweight or obese, may slow down the cellular ageing process that plays an important role in the development of heart disease.

“The majority of sodium in the diet comes from processed foods, so parents can help by cooking fresh meals more often and by offering fresh fruit rather than potato chips for a snack.”

Dr Zhu’s team divided 766 teenagers aged 14 to 18 into different groups according to their reported sodium intake.

Low-intake teens consumed an average of around 5g of salt a day, compared with more than 10g grams for the high-intake group. In Britain the recommended intake is 6g. A recent study showed the majority of teenagers exceed their daily limit, mainly through eating bread and cereal.

Researchers found that overweight or obese teenagers who at the most salt had significantly shorter telomeres than those who ate the least. But high sodium intake did not have a significant effect on telomere shortening in normal-weight teens.

Although the salt link was only found in obese people it is the first time that salt has been shown to affect cellular ageing.
The research, presented at an American Heart Association meeting in San Francisco, suggests a possible link with inflammation, said the scientists. Inflammation is known to hasten telomere shortening and is linked to obesity. It also increases a person’s sensitivity to salt.

Katherine Jenner, Campaign Director at Consensus Action on Salt and Health said: “Lowering your salt intake is essential to lower your risk of not just heart disease, but also stroke, heart attack and chronic kidney disease.

“As you might expect, teenagers often have a high salt diet, but it’s not just pizza, crisps and chips that are the culprits, every day foods such as breads, breakfast cereals and sauces can be surprisingly high in salt.” Nutritionist Sonia Pombo added: “Children are eating a worryingly high amount of salt.

“Dietary habits in childhood and adolescence are likely to influence eating patterns in later life.
“Liking salt and salty foods is a learned taste preference and the recommendation that the adult population reduce their sodium intake will be more successful if children do not develop a preference for salt in the first place.” 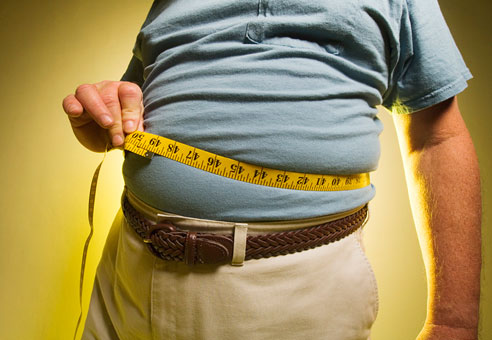 For Australians over age 65 included in a new study, being obese raised the risk of experiencing a fall by 31 percent.

“Falls are one of the most common causes of injury for older individuals and as the world population ages, the number of fall-related injuries are projected to increase rapidly,” said lead author Rebecca Mitchell.

“Likewise, rates of overweight and obesity among older individuals are also increasing,” added Mitchell, a researcher with Neuroscience Research Australia at the University of New South Wales.

Mitchell and her colleagues wanted to determine whether overweight and obesity added to the risk of falling among older adults, as well as the risk of being injured in a fall.

Participants who had fallen one or more times in the previous 12 months as a result of accidentally losing their balance, tripping or slipping were also asked how many of those falls resulted in injury and how many required medical attention or led to hospital admission.

According to the results published in the Australian and New Zealand Journal of Public Health, 23 percent of healthy-weight respondents had fallen once during the previous 12 months and 34 percent had fallen more than once.

About 30 percent of obese respondents fell once and another 45 percent fell more than once, making the overall fall risk 31 percent higher in the obese group.

The obese participants who fell didn’t have any higher risk of fall-related injuries compared to healthy-weight people who fell, but they were more likely to have other health conditions – such as heart disease, diabetes and high blood pressure – and to report being in moderate or extreme discomfort.

Those who were obese and fell were also more likely to be taking four or more prescription medications.

“It is difficult to know for certain why the risk of falling increases for obese individuals, but it is likely to be as a result of reduced peripheral sensation, general physical weakness and instability when standing or walking,” Mitchell said.

There are a number of common risk factors that can increase any older person’s risk of falling, she added.

“These can include individual factors such as: poor health, instability when standing or walking, some health conditions, such as poor vision or dementia, lack of physical activity, use of multiple medications that can affect balance, and a poor diet,” Mitchell said.

Risks can also be in an older person’s environment, including “uneven or slippery floors, unsecured floor coverings, such as rugs, inappropriate footwear or eyewear, or inadequate lighting,” she said.

“As to why fall-related injuries do not increase for obese individuals this is likely to be as a result of adipose tissue (fat) protecting bone,” Mitchell said.

Compared to the healthy-weight group, the obese participants in the study were more likely to be sedentary for eight or more hours a day, to walk less, to have problems walking and to believe that nothing could be done to prevent falls.

Mitchell and her colleagues point out that obesity is associated with a higher risk of certain chronic illnesses, but also that chronic conditions such as lung disease and arthritis can limit activity, leading to weight gain.

To reduce the risk of falls among obese older people, tailored activity programs, such as strength and balance training, as well as home safety assessments and eyesight checks could all be of benefit, they write.

“Everybody knows how falls can be life-changers for older people, from breaking a hip to hitting your head, so if we can prevent them that’s always better and there’s a lot that can be done,” Dr. Sharon Brangman told Reuters Health.

Brangman, who is Chief of Geriatrics at SUNY Upstate University Hospital in Syracuse, New York, and a past president of the American Geriatric Society (AGS), was not involved in the new study.

“We know that when people fall, the biggest problem afterwards is a fear of falling because then they move less or when they walk they hold themselves really rigid and tight which actually increases the risk for falling,” Brangman said.

The American Geriatric Society published fall prevention guidelines for physicians in 2012, she noted. Though they are intended for doctors, some of the suggestions may help families assess the risk in their homes (see: bit.ly/1cWjB86).

According to the U.S. Centers for Disease Control and Prevention, about one of every three Americans over age 65 suffers a fall, and every year 2 million of those falls result in emergency room visits.

The AGS guidelines were intended to encourage healthcare providers to ask about falls, according to Brangman, “because a lot of times it’s not asked and patients don’t volunteer it because they don’t want anyone to know. They’re so afraid that will mean they need to be placed in long-term care or something.”

Brangman said that sometimes patients who are overweight might need a little extra support to realize that their situation isn’t hopeless and that there are things they can do, such as starting an exercise program.

Strengthening the quadriceps muscle group at the front of the thighs is especially recommended.

“Exercise programs that are tailored to the individual can make a difference, and it’s really never too late to start doing something,” Brangman said. “Balance and strengthening exercises, especially exercises that strengthen the quads, are very important in preventing falls in the future.”