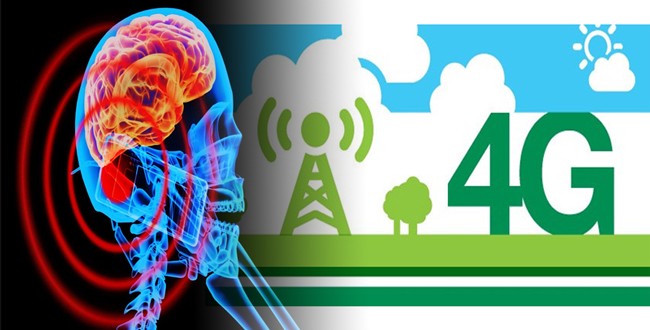 If you’re one of the people who has suspected cell phones/cell towers were bad news, get ready for the latest affront to our health: The 4G/LTE network. This is the latest scheme cooked up by the greedy telecommunications industry. It promises much faster bandwidth than the previous 3G incarnation, thereby providing lightning-fast mobile internet on your mobile phone or device (great for watching YouTube/Hulu). Unfortunately, there is a major downside to 4G technology (and all wireless technology that emits radiation for that matter), and it comes as a cost to our health and well-being.

The problem with many new, potentially dangerous technologies (such as tech/devices that output radiation of any kind) is that companies can make record profits off of them while the public remains ignorant of long-term chronic health risks. Corporations are obviously reluctant in these situations, as they know that researching side effects and informing the public will hurt their profit margins. That is why we’re not told anything negative about new technologies, only how great they are and how much better they are going to make our lives (How did I possibly live without this before?!?!).

The problem with 4G/LTE: The contrived need to have internet access with us at all times

As the internet age has evolved, cellular phones and devices have evolved along with it. Cell phones used to be for making calls on the go. Eventually, text messaging came onto the scene, and that was the new craze. Now, 4G mobile internet and mobile video streaming is the new novelty. Unfortunately, the bandwidth required for mobile internet and video streaming on a cellular device is greater than what can be provided over older, conventional 2G/3G cell phone tower networks. So for 4G, there have been many new high-powered cell towers erected around the world, with little thought about the adverse effects that the addition of more radiation-emitting technology will cause.

4G designers needed to increase bandwidth receiving capability in 4G handsets/devices, so they developed “smart antennas” – a series of 4 antennas in a single phone handset. This is like the equivalent of having four cell phones in one device rather than one (tumor, anyone?). The mobile telecom industry is fully aware of the potential carcinogenic effect of their products, but instead of searching for ways to reduce the potential threat to public health, they are multiplying it. This is just plain unethical business practice.

Over the last 10 years, physicians have noticed a continuous increase in the number of people with chronic complaints. Doctors have taken blood draws or saliva from patients, and determined in 2012 that one in three patients has radiation overload. In 2002, only one patient in 30 were radiation stressed. In 300 patients with chronic health complaints, 138 of them were caused by radiation (from wireless internet or cell phone tech). These numbers have gotten worse with 3G and ubiquitous Wi-Fi hot spots around the world. How bad are these numbers going to get with the 4G/LTE network?

Plankton were used in experiments to test the adverse properties of wireless signals in lab tests. In these experiments, the wireless-exposed plankton died or were deformed within several days of chronic exposure. With Wi-Fi it took 96 hours, 3G took 72 hours, and with 4G the plankton died within 48 hours. Since all living organisms ultimately escape the effects that unnatural radiation has on them, we must ask ourselves this: If wireless radiation is killing or deforming plankton, what is it doing to us?

The Delhi Medical Association (DMA) Friday rubbished reports that radiation emitted from cell phones and their towers cause cancer.

“Radiation from mobiles and mobile towers pose no threat to the health or cause cancer as it is commonly believed,” DMA president Anil Agarwal said at a press conference here.

“The radiation waves are too weak too cause such a deadly disease and moreover there are no empirical findings to establish that mobile tower radiation causes cancer or any such disease,” he said, adding the medical experts from the DMA have come to this conclusion after reviewing the study done by the World Health Organization (WHO).

The WHO conducted a research where they had consulted 4,50,000 cell phone users in the past 13 years, but had not been able to provide support for any relationship between the emission of radiation from mobile phones and cancer, said P. Ramakrishna, a consultant on electro-magnetic fields (EMF).

Even the study done by US’ National Cancer Institute shows no increased risk for brain tumors from cell phone use, he added.