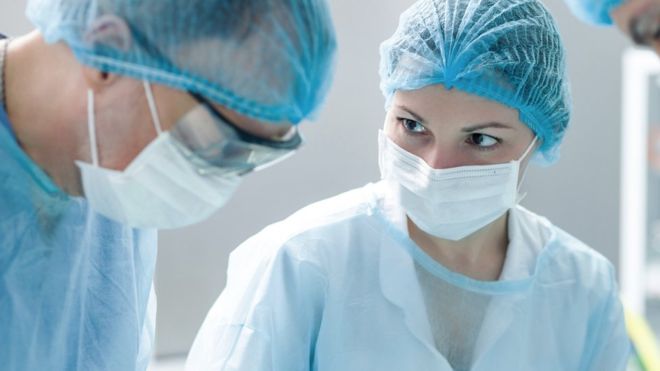 The number of medical school places will increase by 25% from 2018 under plans to make England “self-sufficient” in training doctors.

The government’s plan will see an expansion in training places from 6,000 to 7,500 a year.

Ministers believe increasing the number of home-grown doctors will be essential given the ageing population.

There is also concern it will become more difficult to recruit doctors trained abroad in the future.

About a quarter of the medical workforce is trained outside the UK, but the impact of Brexit and a global shortage of doctors could make it harder to recruit so many in the future.

Prime Minister Theresa May told the BBC: “We want to see the NHS able to recruit doctors from this country. We want to see more British doctors in the NHS.”

The increase also comes after the government has spent a year at loggerheads with junior doctors over the pressures being placed on them to fill rota gaps.

9% due to retire in next five years

2% more needed each year to keep up with demand

Dr Daniel Bunce, 27, is in his third year of being a junior doctor after completing his medical degree. He is now working in a hospital in the south west in intensive care.

He says he got into medicine because he wanted to “care for people and make a difference”.

“It’s been difficult. There is so much pressure, particularly during winter. We just don’t have the time to spend with patients that we need to provide the care we want to because we are rushing around just trying to keep up.

“I’m now working in intensive care so the staff to patient ratios is much better than it was when I was on medical wards. But the workload is making people I work with think about whether this is something they want to do for the rest of their career.

“The increase in medical school places is a good move, but we will have to see what impact it has in hospitals in the long-term.”

Medical degrees take five years to complete, so it will be 2024 before the impact of these extra places is felt.

But Mr Hunt told the Conservative Party conference in Birmingham on Tuesday: “We need to prepare the NHS for the future, which means doing something we have never done properly before – training enough doctors.

“Currently a quarter of our doctors come from overseas. They do a fantastic job and we have been clear that we want EU nationals who are already here to stay post-Brexit.

“But is it right to import doctors from poorer countries that need them while turning away bright home graduates desperate to study medicine?”

Mr Hunt said the steps would mean that by the end of the next Parliament the health service in England would be “self-sufficient” when it comes to training doctors.

Analysis: Will this work?

There is widespread agreement that the NHS is facing a crisis when it comes to doctor shortages. It is one of the underlying reasons why the dispute between the government and junior doctors has been so bitter.

So news that the number of training places is to increase by 25% is certainly being welcomed by many. But whether it is enough is another matter.

The health service employs more than 150,000 doctors – a quarter more than it did a decade ago. But even that has not been sufficient – vacancy rates are said to be running at close to 10%.

This is despite huge numbers being recruited from abroad. In fact, the numbers registering to work in the NHS from outside the UK has been outstripping those graduating from medical school in recent years.

The future, of course, is fraught with difficulties. The impact of Brexit on EU doctors is uncertain, there are large numbers due to retire – a figure of 13,500 in the next five years has been suggested – and then there is the not insignificant numbers who leave the NHS for other countries or opportunities.

The rise in training places will cost £100m from 2018 to 2020, but in the long-term the government hopes to recoup money by charging foreign students more than it does now.

Medical students will also be expected to work for the NHS for at least four years – or face penalties that could include them having to repay the cost of their training, which currently stands at £220,000 to the taxpayer over the five-year degree.

The details of how this will work have yet to be ironed out and, in particular how it will apply to doctors moving to another part of the NHS in Scotland, Wales and Northern Ireland. This announcement applies to England only.

At this stage it is thought unlikely that ministers would want to apply the four-year restriction to doctors wanting to move to other UK nations.

“The government’s poor workforce planning has meant that the health service is currently facing huge and predictable staff shortages,” he said.

“We desperately need more doctors, particularly with the government plans for further seven-day services, but it will take a decade for extra places at medical school to produce more doctors.

“This initiative will not stop the NHS from needing to recruit overseas staff.”

Nigel Edwards, chief executive of the Nuffield Trust, said: “For decades, the NHS has failed to train enough of its own staff, so increasing the number of UK-trained medical staff is long overdue.

“However, if this new announcement involves simply replacing overseas doctors with UK-trained ones, that won’t increase the total number working in the NHS, and certainly won’t solve the agency staff crisis that is affecting the NHS right now.”

Chief Executive of Dartford and Gravesham NHS Trust Susan Acott told the BBC there were shortages in specialisms including Accident and Emergency, radiology and intensive care in her hospitals.

“An expansion of medical training is very desirable,” she said. “We’re a very under-doctored country compared to European levels.”

The idea that doctors could be retained in the UK once they had trained was an “interesting” idea, she added, but there were practical obstacles.