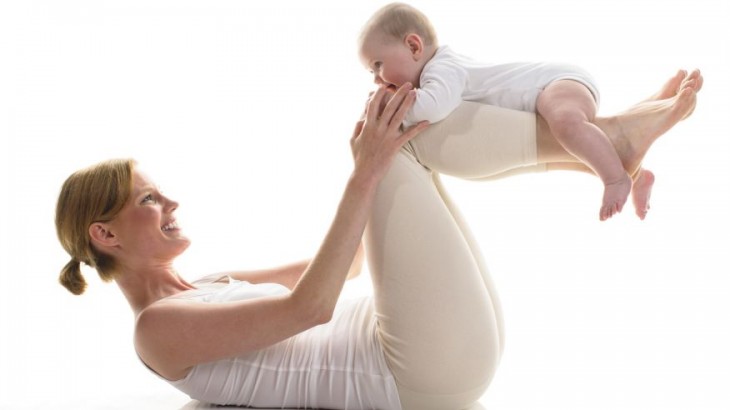 Instead of trying to squeeze in a workout while your newborn is napping— and potentially skipping over any other responsibilities you have piling up— some women are working out with their children.

“If we incorporate our children into our fitness routine we’re killing two birds with one stone,” Andrea Van Zile, mother of 3-year-old Kaia, told FoxNews.com. “We are playing with our kids we’re engaging them in a physical way while exercising.”

Plus, working out with your children will teach them the importance of being active and how to incorporate movement in their normal routines.

Van Zile, who is a Pilates instructor at Vida Fitness and studio manager of SweatBox in Washington, D.C., suggested getting your pre-pregnancy body back with a mother-child workout that allows the little ones to imitate your movements and, if they’re feeling playful and jumping on you, can give you an even tougher workout.

Plank: There are two versions of this, depending on how strong you feel.

The first is to do a modified plank on your hands and knees. Start on your knees and come on to your hands on all fours. Make sure that your shoulders are directly over your wrists and that weight is evenly distributed between all your fingers. Push back into child’s pose and then up to all fours. Shift your weight forward so your chest reaches beyond your wrists and your hips are forward of your knees. Your knees and lower legs remain on the floor. Hold it for 30 seconds, then 60 seconds and then 90 seconds progressing yourself as you build strength and resting in child’s pose in between.

From there you can lead into the full plank, tucking yours under to straighten your legs, like the top of a push-up. Energetically push away from the mat and raise your back to the ceiling. Your tailbone should be tucked under so that your pubic bone is up toward your belly button. Pull your heels and crown of your head away from each other.

Your child can imitate you or hop on your back for some added weight.

Squats: Van Zile likes to do squats in front of a couch or chair so that she knows how low to go. Stand with your feet just wider than your hips with a tiny turnout of your toes. Pitch your body forward and sit back toward the couch, keeping your knees directly over your ankles. Push through your heels and stand all the way up, tightening your core and strengthening your posterior chain. Your child can hop on your back like a piggyback ride for some extra strengthening.

Scissors: Lie down on your back and curl your chest up so you’re on the tips of your shoulder blades. Send your feet to the ceiling keeping your tailbone heavy. Lower your right leg 45 degrees and slowly scissor back and forth between each leg for ten repetitions. If your child hops on, you can take them for a ride on your legs which is fun for them and gives you an added workout.

Van Zile noted that, before you make any lifestyle changes, especially after giving birth, consult with your doctor.

In a large study of women’s health, postmenopausal women who followed a healthy lifestyle were at a third lower risk of death, including a 20% smaller chance of dying from cancer, than women who did not follow guidance on diet, weight, physical activity, and alcohol intake.

“While it is well recognized that tobacco cessation is the lead behavioral change to reduce cancer risk,” the authors write, they analyzed the effect of other cancer prevention recommendations.

The researchers used data gathered by the observational study in the women’s health initiative of the US National Institutes of Health, which was launched in 1992 with a $140 million, 15-year contract: “the largest coordinated study of women’s health ever undertaken.”

Cynthia Thomson PhD and her colleagues analyzed data from 65,838 postmenopausal women age between 50 and 79 years.

The participants were enrolled in the women’s health initiative between 1993 and 1998 at 40 clinical centers across the country, and the team’s analysis represents the “largest study of postmenopausal women in the US.”

The recommendations being followed were the American Cancer Society (ACS) guidelines on nutrition and physical activity, which have four central planks:

“Achieve and maintain a healthy weight throughout life”
“Be physically active”
“Eat a healthy diet, with an emphasis on plant foods”
“If you drink alcohol, limit your intake.”
Dr. Thomson, professor of public health at the Mel and Enid Zuckerman College of Public Health at the University of Arizona in Tucson, says:

“The message is simple and clear: If you want to reduce your risk for cancer, even later in life, eat a healthy diet, be active daily, avoid or limit alcohol, and don’t smoke.”

“Our results support the ACS guidelines for cancer prevention,” Thomson adds, but she calls for more support for other factors that can reduce the risks further, “because diet and activity alone do not account for the majority of risk.”

The researchers scored women’s adherence to the lifestyle advice on cancer prevention.

Zeroes were given for “behaviors least consistent with the recommendations” and scores of one or two were given for healthy lifestyle actions, adding these up to a maximum level of compliance represented by a total score of eight.

Most of the women in the study had final scores between three and six. Fewer than 1% of the women scored eight after following all of the recommended lifestyle choices.

Analysis of almost 9,000 cancers
Data on the women were collected over an average of 8.3 years, a period that witnessed the diagnosis of 8,632 cancers and 2,356 cancer-related deaths.

The women whose lifestyles were rated the healthiest (a score of seven or eight) showed a lower risk of overall cancer compared with those given low scores (from zero to two).

This included a reduction by a fifth in their risk for breast cancer, and by half for colorectal cancer.

The healthier lifestyles were also associated with a lower risk of death from other causes not related to cancer.

The authors note that guidelines for healthy lifestyle in the prevention of cancer have been based on evidence from few such prospectively identified associations.

The researchers’ conclusions are drawn from the women’s health initiative, which was a study designed at the outset to track future health changes over time.

Such prospective studies result in comparisons that are controlled and more reliable than can be drawn retrospectively, by looking back on data that was not collected for the purpose.

Lifestyle effect was greater in some groups of women
The analysis found an even lower incidence of cancers and lower overall death rate among women from certain ethnic groups as a result of the lifestyle measures, and the paper calls for more research into this difference.

“We found that the association was stronger for Asian, African-American, and Hispanic women, compared with non-Hispanic white women.

It is possible that different ethnic groups may have differential disease course with varied response to environmental and/or behavioral exposures.”