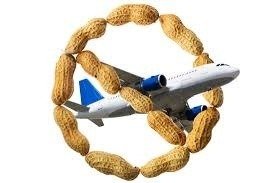 Preparing for air travel can be highly challenging for nut-allergic passengers, a Short Report published in the Medical Journal of Australia has found.

Over 90 million passengers are carried on Australian flights each year, with 1-2% reporting they have documented food allergies. Dr Mark Hew and colleagues from the Alfred Hospital conducted a survey of all domestic and international airlines that fly from Tullamarine to assess their nut allergy policies.

The researchers found that 61% of airlines had online or telephone hotline information about nut allergy policies. Only a minority of airlines were able to provide nut-free meals. “Nine airlines (27%) offered nut- free meals, two routinely and seven on request. For the other airlines, nut-allergic passengers would need to fast (only practical on short domestic routes) or bring their own food,” the authors wrote.

A third of the airlines could restrict the distribution of packaged nuts on flights if required.

Only one airline operating from Melbourne’s Tullamarine airport confirmed that emergency adrenaline was available on all flights.

For nut allergic individuals, the authors recommended that they contact their airline before travelling, develop an allergy plan with their doctor, carry their own emergency adrenaline, and consider bringing their own food. “Airlines should make their nut allergy policies more accessible and consider carrying emergency adrenaline on all flights,” the authors concluded.

A new study has revealed that eating a diet rich in fibre can protect against allergic asthma by triggering changes in the immune system.

Benjamin Marsland from the University Hospital of Lausanne in Switzerland and colleagues found that levels of dietary fibre, found in fruit and vegetables, can influence the balance of microbes in the gut in ways that make the airways more or less prone to the inflammation seen in allergic airway diseases, New Scientist reported.

The researchers, who looked at how the immune and inflammatory responses of mice varied with the fibre in their diet, found that when the mice were exposed to an extract of house dust mites, those fed with less fibre had double the number of a specific type of immune cell associated with asthmatic inflammation in their airways, than those on a standard diet.

It was found that mice given additional fibre supplements on top of a standard diet showed a reduction in these immune cells, but only if the supplement was easily fermentable in the gut.

The study was published in Journal Nature Medicine.

35 million Americans suffer from allergies, which in the fall begin in late August and peak in September.

With summer coming to a close, and kids heading back to school and preparation for fall begins, we shouldn’t forget to consider fall allergies.

An estimated 35 million Americans suffer from allergies, which in the fall begin in late August and peak in September.

“During the summer, people experience the lowest incidence of allergies and asthma so they feel better and stop taking their allergy medications. But they should start taking them again in early September to prevent symptoms before they start,” David Rosenstreich, M.D., director of the allergy and immunology division at Montefiore Medical Center, said.

“If allergy sufferers make the mistake of waiting until after their symptoms are in full swing, it’s much harder to stop the allergic reaction than to prevent it from even beginning,” he said.

One of the biggest culprits for fall allergies is ragweed.

In the fall, ragweed releases pollen into the air and this continues until frost kills the plant closer to winter.

Most prevalent in the Eastern and Midwest states, ragweed causes an allergic reaction commonly called hay fever and results in symptoms that include itchy eyes, nose and throat, sneezing, stuffy or runny nose, tearing or dark circles under the eyes.

An allergy symptom is the result of the immune system overreacting.

Another trigger for allergies during the fall is due to people staying indoors more and they are therefore exposed to allergens like pet dander, dust and mold.

Several precautions to consider includes maintaining an allergen free environment at home, focus on your bedroom: keep your pets out, eliminate the rug because it collects dust and avoid feather pillows.

Make sure the fireplace is well-ventilated and be careful of any leakage and keep basement and bathroom dry to avoid mold growing in these damp areas of the house. Have your heating system cleaned to avoid dust mites when you first turn on the heat.

The third trigger is infections and the flu, which affect the body’s immune system and cause it to release antibodies and histamines to fight them off.

The flu vaccine is recommended to help reduce the risk of getting sick, but it’s even more important for people who suffer from asthma or other lung conditions.