An Indian man survived for two months with a bullet lodged just in his heart after walking in on a bank robbery. Bharat Sharma, from Aligarh in Uttar Pradesh, northern India was shot on July 22 as thieves targeted his local bank.

As the 32-year-old tried to deposit a number of cheques for his company, he walked in on the ambush. Two 20-caliber bullets were fired – one hit Mr Sharma’s waist, while the other became lodged in his heart.

A week after the robbery, surgeons at the Jawaharlal Nehru Medical College in Aligarh, removed the bullet in Mr Sharma’s waist. But doctors refused to remove the bullet in his heart, fearing the newly married man would lose his life.

A second referral to Safdarjung Hospital in New Delhi saw Mr Sharma refused for surgery a second time. For two months he lived with the bullet lodged in his heart.

Eventually doctors at Sal Hospital in Ahmedabad, Gujarat, accepted the challenge and agreed to take on Mr Sharma’s case. They successfully removed the 20-caliber bullet yesterday.

Dr Anil Jain, Cardiac Surgeon, who led the surgery, said: ‘It was a very rare case and extraordinary that he was living with a bullet in his heart for two months. ‘The bullet was lodged in the heart muscle before the apex of the left ventricle, one of the two chambers of the heart.

‘It was just a millimetre away from puncturing the left chamber and could’ve killed him. ‘Whenever the heart pumped, the bullet would’ve moved proving fatal. 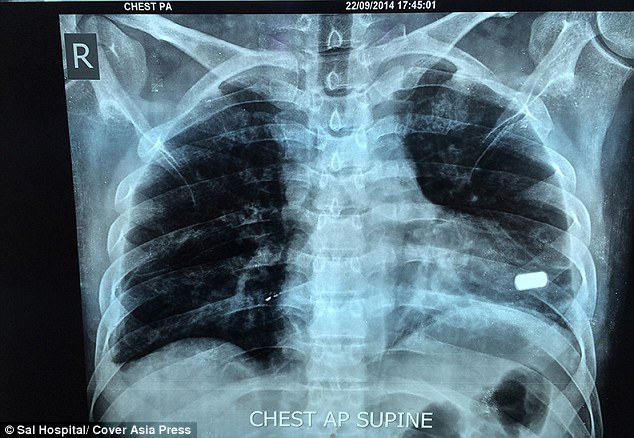 ‘It’s a unique story and he’s been a very lucky man.’

During the three-hour surgery, the team of five doctors put Mr Sharma on a life support machine so they could take out the bullet and stitching up the vital organs with less risk. His brother Manish Sharma, 38, said: ‘I am relieved that my brother has got a new life.

‘I am thankful to the doctors for accepting our case and giving him his life back.’ Mr Sharma, who is now recovering at the hospital’s ICU, wants to preserve the bullet as a reminder of how close he came to death.

The bullet will also be used as evidence in the case against the burglars, who are still on the run.